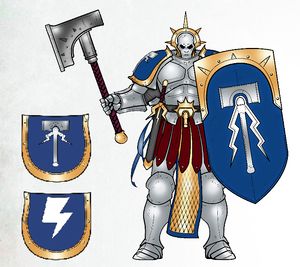 A Liberator of the Hallowed Knights.

"Only the Faithful" - warcry of the Hallowed Knights.[4a]

The Hallowed Knights are the fourth Stormhost of the Stormcast Eternals to be founded. They wear burnished silver armor. The Hallowed Knights are zealous and loyal to Sigmar and their absolute faith in them is absolute. To them the war against Chaos is a sacred crusade for which no sacrifice is too great. They are so pure of spirit and filled with so much holy fervour that they fear no evil and evil magicks have little hold on them. [1][15]

They were recruited from all of the Mortal Realms, from those warriors that devoutly worshipped Sigmar. Those who called upon Sigmar's name in battle while fighting for a righteous cause. Taken to the Realm of Heavens they were told by Sigmar that he would not aid them, but rather they who could further serve their god.[4a][15]

During the Realmgate Wars chambers of Hallowed Knights were sent to the Realm of Life to find and renew the alliance with Alarielle while opening Realmgates to Azyr and fighting back the forces of Nurgle. They succeeded in finding Alarielle and together with other Stormhosts and Sylvaneth allies held back the tide of Chaos protecting Alarielle's soul till she assumed her war aspect and fought back. Their role in the War of Life resulted in the Stormhosts receiving the blessings of Alarielle and since then a glowing figure known as the Silvered Saint has been sighted in and around their foremost Stormkeeps. [3][16a][16c]

Tarsus Bull-Heart led a force of the Bull-hearts Warrior Chamber in the Realm of Death, seeking the Starless Gates, also called Nine Gates of Stygix, and an audience with Nagash. To reach his goal, Tarsus freed Mannfred von Carstein from the Bloodbound, clutching a pact with him. However when they reached Nagash after fighting through armies of Chaos and the undead they were attacked by Nagash who easily defeated the Stormcasts and trapped their souls. It was due to the sacrifice of Tarsus that the souls of his brothers were released and sent back to be reforged in Azyr but his own soul was captured by Nagash.[5][6][7][9]

After the Realmgate Wars they aided in the construction of cities such as Hammerhal and Gravewild and continued to push back the forces of Chaos from the Mortal Realms and during the founding of Gravewild the Hallowed Knights recaptured Mannfred who led the Bull-Hearts under Ramus to Nekroheim who were followed by Gardus and the Swiftblades Chamber led by Lord-Aquilor Sathphren Swiftblade. There Nagash confronted them but was convinced to return the soul of Tarsus by Mannfred to which Nagash agreed as he had learnt everything he needed and returned Tarsus who was now broken by Nagash's experiments both in mind and soul as a result of being broken into pieces and rebuilt by Nagash in his attempts of understanding the Stormcasts.[18]

The Sepulchre of the Faithful

All Stormhost have their mausoleum, but the Hallowed Knights call it Spulchre of the Faithful. It's a place of quiet contemplation, where the truly dead are honoured and the memories of their mortal lives are recounted and recorded so that even if they forget, those moments are not lost.[17a] The vast antechamber has bas-reliefs of intricate craftmanship, massive pillars inscribed with the Canticles of Faith, ornate lanterns and great ironbound books chained to stone shelves along one wall. They're the Books of the Faithful, containing the mortal memories of every Hallowed Knight. Every member of the Stormhost can read them, but the Lord-Relictors have the duty to protect and add memories to them.[17a] The inner chamber of the Sepulchre of the Faithful has an enormous pillar of pale stone, said to have been carved from purest celestine by the claws of Dracothion himself, and chiselled into its present shape by the ancestral tools of the greatest masons of the Dispossessed. The pillar has no decoration, but it has several sigmarite spikes hammered into its surface, one for every Hallowed Knight truly dead, never to be Reforged. When a new spike must be added, many Hallowed Knights gather inside the inner chamber and a Lord-Relictor bless the spike in the name of the lost Stormcast, then he drives it in the pillar using his hammer.[17a]