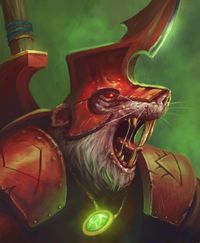 At the start of the war for the Scabrous Sprawl, Hakfang was nothing more than a Clanrat of Clan Mors, but with cunning, violence and luck he disposed of his rivals, personally or by flinging them at the Stormcast Eternals. He sabotaged the weapons of the Warlock Engineers, pushed engine masters into their own furnaces and stabbed superiors with weapons stolen from his foes. At the end of his ascension he backstabbed his former Warlord Skuttklaw and personally offered his corpse to the Verminlord Gnawsoul. He planned to use the power he had gained to win the war for the Clans Verminus after the countless failures of the Clans Skryre.[1]