From Age of Sigmar - Lexicanum
(Redirected from Hagg Nar)
Jump to: navigation, search 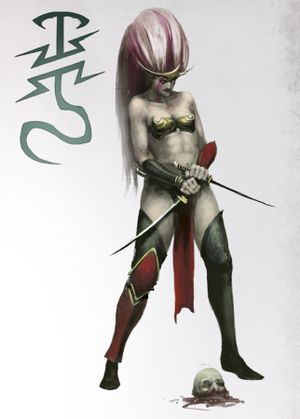 A Witch Aelf of Hagg Nar.

In the centre of the Umbral Veil in the Realm of Ulgu is the great temple-city of Hagg Nar where Morathi first established the temple to Khaine. The pre-eminent sect of the Daughters of Khaine was named after this location to which every aelf pledged to the cult must travel at least once. [1b]

Although their stronghold remains at the temple-city there are many shrines to the sect across Ulgu and in the new cities of Order across the Mortal Realms. The other sects often jealously note the high favour in which they are held, the secret magic they are privy to - taught by the High Oracle herself.[1b]

The magical Bloodwrack Medusae carry great favor in Hagg Nar. Sometimes these favored Medusae are chosen to lead one of the many War Covens of Hagg Nar, earning the title of Saim-Suprema.[3a]

The sect favour red clothes and armour often with significant amounts of gold as befits their high status as well as dyeing their hair with blood.[1b]

They are guardians of sacred artefacts such as the cauldron Máthcoir and the Svartlepit.[1a]