From Age of Sigmar - Lexicanum
(Redirected from Gutter Runners)
Jump to: navigation, search 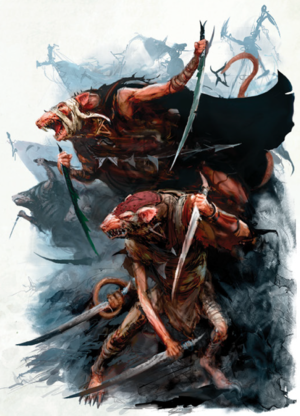 A horde of Gutter Runners.

They have proven themselves as Night Runners and were claw-picked by their masters to be initiated into the deeper mysteries of Eshin. Unlike other Great Clans, the Eshin Clans require that a Skaven must earn the right to progress through the ranks and those that tried to trick or murder their way to the top are never heard from again.[1]

Gutter Runners are adept at both armed and unarmed combat, using a fighitng style that allows them to attack with great speed and dexterity. They often act as scouts and saboteurs that assassinate enemy leaders, steal plans, sabotage weapons and rations before the battle begins. When the battle begins they slip through the carnage like ghasts, emerging from enemy flanks and rears to strike weak points before fading away to strike another place.[1][2a]

Gutter Runners are armed with a combination of Punch Daggers and Blades. They also carry Eshin Throwing Stars which are hurled at the enemy in rapid volleys.[2a][2b]