From Age of Sigmar - Lexicanum
(Redirected from Gryph-Charger)
Jump to: navigation, search 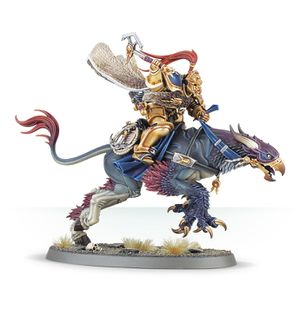 Gryph-chargers are noble, intelligent, and powerful creatures native to the Realm of Azyr[1b], that have become some of the most prized mounts of Sigmar's Stormhosts. Their trust is not easily earned and they only bond with those, whether mortal or Stormcast, that display great humility and strength before the beast. This most often happens in the midst of battles or hunts.[1a]

Gryph-chargers can run through aetheric winds, making them devastatingly swift.[1a]

Bonding with a Gryph-charger is a monumental task, for both Mortal and Stormcast riders, but once a bond is formed rider and beast become a deadly and powerful duo.[1a] Among the Stormhosts of Sigmar it is the Vanguard-Palladors of the Vanguard Auxillary Chambers and Lord-Arcanums of the Sacrosanct Chambers that are most well-known for riding into battle on bonded Gryph-chargers.[2a][2b]