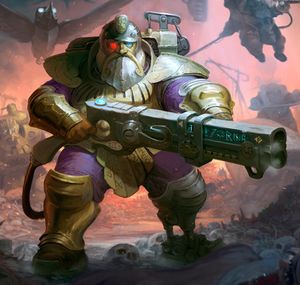 Their main task is to repel boarders but they are equally capable on the open field. The endless training and drilling in the Grundstok Academies provide them with high standards of discipline and marksmanship. Led by their Grundcaptains, they are able to move and ready their aim with awe-inspiring speed and precision. Firing in near-perfect synchronicity, a line of Grundstok Thunderers can unleash a storm of munitions that can halt even the most well-armoured foes in their tracks. Grundstok Thunderers are transported aboard an Arkanaut Frigate or Ironclad, forming an invaluable reserve that can be deployed quickly wherever they are needed most. [1a]

The Grundstok Companies are equipped with the finest arms and armour available to the Kharadron Overlords. Aethershot rifles shoot a hypercharged blast of aether that condenses mid-flight into a solid round, combining a high rate of fire with impressive stopping power and Gunnery Sergeants wield a double-barreled version. Aethercannons operate similarly but fire rounds of a much larger calibre. The aetheric fumigator unleashes a cloud of noxious fumes, while the multi-barrelled decksweepers fire a wide spray of aether-grain shot. Grundstok mortars lob a high-arcing shell that terminates in a blinding explosion of lethal aether-energies.[1a]

Grundstok Thunderer formations often include an Honour Bearer, a warrior carrying an ancestral standard that holds a record of the unit's proud history. they are also accompanied by an aethermatic bird known as a drillbill, in honour of the original that was taken to battle by Grundstok himself. [1a]