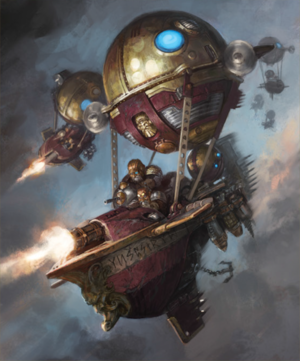 Grundstok Gunhaulers are kharadron attack craft and are amongst the fastest skyvessels in the sky-fleets. Unlike larger ships they do not belong the Arkanaut fleets but to the Grundstok Company whose contractors are hired by the Sky-fleets to act as escorts.[1a]

Gunhaulers are a two-duardin attack craft, propelled by a single buoyancy endrin and armed with an array of deadly main and secondary armaments. A Gunhauler is able to divert more power to its aether-endrin to massively increase its speed.[1a] 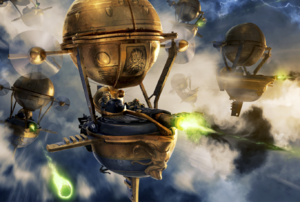 Gunhaulers will, depending on the Admiral's orders, alternate between defensive and offensive roles. When on the offensive, they are often sent to eliminate specific targets which they seek out through the chaos of battle before blasting them to shreds. They are also able to defend larger vessels and each crewman has been relentlessly drilled in the importance of safeguarding their sister ships. Gunhauler pilots use their craft's high agility to intercept airborne enemies and will even position themselves to absorb incoming attacks. Despite their size, Gunhaulers are still sturdy, duardin-made constructs built to endure heavy damage.[1a]

The main weapon of a Gunhauler is either a Sky Cannon or a Drill Cannon which fire shells that burrow into the target and then explode. In addition, it carries an Aethershot Carbine, Boarding Weapons and Bomb Racks which carry bombs and skymines. [1a]