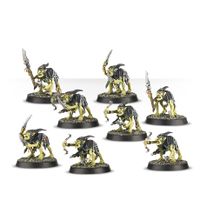 A mob of Grot Scuttlings

Grot Scuttlings are a type of grots that live in the Silver Towers, infesting the Gaunt Summoner's domain neither by his will or permission. These green-skinned invaders, sprouting like fungus and ensnaring the unwary that they might devour. Grot Scuttlings resemble half-arachnid half-grot creatures and are tribal and wily. They have four grot legs and two hands in which they clutch stabbas, spears and Huntin' Bows.[1]

When some Grots start eating a strange fungus that grew on big spiders, which, over some time, caused them to mutate and so Scuttlings were created.[3]