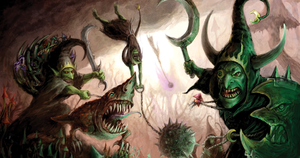 A grot Loonmasha Fanatic amongst other Moonclan grots.

Grot Fanatics are insane Grots of the Moonclan, each tethered to a massive ball and chain and then sent spinning towards the ranks of their enemies. They live glorious lives, with a distinct lack of self-preservation, inflicting horrendous casualties followed by trails of broken mangled bodies. [1a][2]

These spinning grots inevitably lose control, resulting in crashes against rocks, trees, other fanatics or even cases of sudden death. Their lives are ultimately short as they are just as apt to kill themselves as their foes, ending in a pile of chain and a barely recognisable grot corpse.[1a][1b][1c][2][5]

These weapons are so large that it is impossible for a normal grot to pick them up. This is only possible after drinking a brew made from the Mad Cap fungus, boosting their strength so they can spin these heavy weapons in a bone-shattering whirlwind.[4]

Loonsmasha, also called loonies, are those fanatics that have been driven loopy with the fungus brew they imbibe. They attack foes with their massive Balls and Chains, causing bloody carnage in a whirling storm until they reach their inevitable end.[5]

These grots are deadly surprise-attack units that can hide and lurk secretly amongst the mobs of their fellow Moonclan. When their foes get close enough they will swing their balls and chains in a brutal whirling of death. Their foes are always watching formations for these Fanatics.[1a][1b][1c][5]

These mad spins generate spore clouds that have a wild range of effects. Nearby Moonclan will be invigorated and driven into a frenzy by these spores. These clouds are so dense they create a veil that hides nearby grots from sight. Foes will also be choked and blinded if they are close enough.[1c][5]