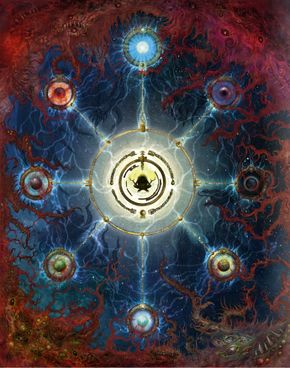 The Great Plan is an obscure vision crafted by the Old Ones, the lost masters of the ancient slann, whose ultimate aim is the annihilation of Chaos. The Great Plan is woven into every fabric of Seraphon society, for whom the Seraphon fight for as a unified goal.[1c]

While the Slann Starmasters appear somnolent at times, they in fact shoulder a great burden that only the gods could hope to understand. It is the slann who are charged with bringing the Great Plan of their lost masters to fruition[1c] and it is the purpose of the slann to interpet the Great Plan.[1a] The slann's memories of their cosmic mission's particulars are hazy, perhaps in a deliberate effort on the part of the mage-lords to protect their themselves from the horrors of the dark days that saw the Old Ones lost. While each slann remembers the finer details of the Great Plan differently, all agree that its purpose - the destruction of Chaos.[1c] However, on occasion the Seraphon will fight amongst themselves, with their Starmasters deeming the varying methods of pursuing the Great Plan incompatible.[1a]

After aeons of drifting through the aetheric void within the temple-vessels, and the arrival of the slann within High Azyr, the slann decreed that it was time to recommence the Great Plan. During the Age of Myth, the prescience of the slann foretold of the coming Age of Chaos, thus it was ordered that the Great Plan must progress as much as possible before the age of bloodshed begins. Seraphon constellations moved to claim the first nodes of what would become Astromatrix. Waypoints running along ley lines are seized and reinforced, which formed the foundations of gleaming temple-cities.[1e] the Great Plan itself is impossibly vast in scale. To the Old Ones, the very stuffs of universes were but building blocks to these beings, through which they could sculpt existences of their own, more ordered image. To achieve their inconceivable ambitions, they constructed many strange devices to amplify their phenomenal magical powers, many of which are now lost. However, one device still in possession of the slann is the Engine of the Gods, which they utilize to send shock waves across battlefields across the Mortal Realms.[1i]

The fabric of Seraphon society is woven precisely to meet the needs of the Great Plan. The Temple-Cities of the Seraphon are used as an anchor point for which to morph the material plan in line with interpretation of the Great Plan.[1d] The various cultures, and many bizarre sub-cults of the skinks are tolerated by the slann so long as they do not interfere with the Great Plan.[1g]

The different members of the Seraphon society each play a unique role in preserving and advancing the Great Plan. Saurus Eternity Wardens are assigned with protecting crucial elements of the Great Plan, including the defence of the Starmasters themselves. Given that Eternity Wardens never seem to change over time, always possessing the same wounds and fighting styles, some skinks believe that they are not true Seraphon at all, but rather beings of pure Azyrite energy who are forbidden to rest until the Great Plan's completion.[1f] Likewise, many subspecies of skinks each possess their own unique qualities, and each are vital for the propagation of the Great Plan.[1h]