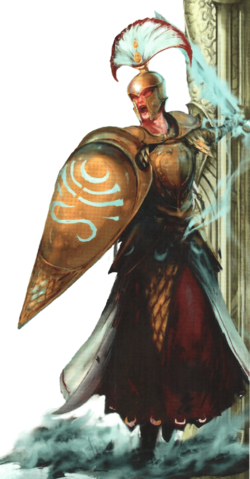 Zaitrec is one of the Ten Paradises of the Realm of Hysh. It is located on the southern part of the Teclian hemisphere, neighbouring Ymetrica, Xintil and the Tyrionic Nation of Alumnia[2b]. Zaitrec is one of the so called Teclian nations who primarily base their culture on the teachings of Teclis.[1]

Zaitrec is the chosen homeland of the Arch-Mage Teclis and the Lunasphinx Celennar, and just like them, the Zaitreci are well versed in the arcane arts. Zaitrec is a land of mystics and mages, the Aelfs of these lands especially gifted in the magical arts.[2c] The Zaitreci are fascinated by all forms of magic, and seek out those skilled in the magical arts, no matter their race or creed, from the blood magic of the Daughters of Khaine, to the primitive but brutal magic of the Orruk tribes.[2c] Only the tainted magics that draw from the corrupting Realm of Chaos, and the magic of the hated Bad Moon are utterly forbidden.[4a]

Maybe its this natural curiosity that caused Teclis to chose the Zaitreci to act as his ambassadors to the other Realms, and as teachers for the less civilized races. Its those Aelfs of Zaitrec that can be found most often among the diplomats or advisors to the fledgling nations of Order.[2c]

Even when night falls over the lands of the Lumineth, and Ulgu's shadow eclipses Hysh's light, the lands of Zaitrec glow in magical shimmer. The people of Zaitrec don't fear the night, as they revere the ethereal moons of Hysh, waxing and waning as they phase in and out of reality. A Zaitreci may talk to the spirits of these distant moons like to a close friend, asking them to share their knowledge and wisdom with them.[2c] The Zaitreci believe the Moons to be omniscent beings, that will gladly offer their wisdom, if only asked the right questions. While other Lumineth view the Zaitreci as strange and fey-like, the wisdom they display lends some credence to their claims.[4a]

Symbols of lunar cults can be commonly found on robes or armor worn by the people and Vanari of Zaitrec, while those most closely to the celesital spirits sometime wear a crescent-shaped halo above their heads.[4a]

Many of the spire-cities of Zaitrec claim one of the ethereal moons as their patron, but none is as revered as Celennar, the True Moon of Hysh. Many Aelfs travel great lengths for a chance to gain some of the Lunasphinx wisdom. Those approaching the duo often spare Teclis little attention. "Better to learn from the source than from the mouthpiece" is a common sentiment among the Aelfs of Zaitrec, much to the irritation of the Arch-Mage.[2c]

While the Lunar Cults of Zaitrec revere the moons of Hysh, they fear and hate the Bad Moon worshipped by the cave-dwelling Gloomspite Gitz. Many grand rituals and spells have been woven to ward of the malicious moon, but still it moves across the skies of the mortal realms as it pleases.[2c] 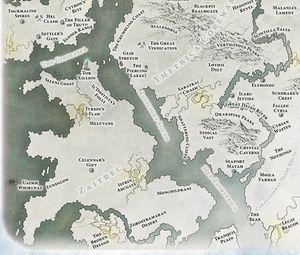