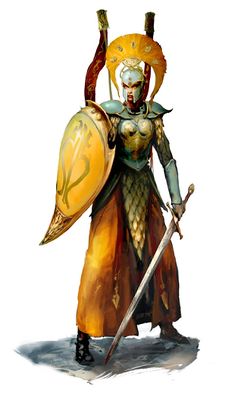 Great Nation of Iliatha is one of the ten Paradises of the Realm of Hysh. Located on the Iliathan Geosegment, its situated between the nations of Syar and Ymetrica [1]

The matriarchal nation of Iliatha is one of the so called Teclian nations, who primarily base their culture on the teachings of Teclis.[1]

The nation of Iliatha is a matriarchal society, putting great stock into the propagation of life, the Iliathans are by far the most populous of the Lumineth Realm-lords Nations. [1][3a] The Aelfs of Iliatha believe that wisdom and knowledge is something that needs to be nurtured and passed on to the next generation, as it can easily be lost or squandered if one is not careful. For that reason, the Iliathans put great emphasis on raising the next generation of Aelfs. They see it as everyone's duty to pass on their knowledge, so that the young may exceed those that came before them. And over time, change the Lumineth society for the better.[2a]

Mothers and motherhood are held sacred in Iliatha, and those matriarchs that have passed on their knowledge to the next generations enjoy the highest status in iliathan society.[3a]

Not only do the Iliathans value aelven life, but life in general. The Iliathans carefully tend to the nature around them. Resulting in their forests and meadows being some of the most glorious of all of Hysh. Plenty of Sylvaneth reside in the glades across Iliatha, and Alarielle herself is revered only slightly less than the Iliathan's own twin gods, Tyrion and Teclis.[4a]

While natural reproduction is one way, its not the only way avaible to the Lumineth of Iliatha. During the days before the Ocari Dara, the Lumineth of Iliatha perfected the art of duplication. Splitting ones consciousness into multiple identical bodies. Some Iliathans came to see this as a cleaner, safer alternative to the messy and painful act of birthing a new child. While others came to excessively split themselves to further their fame and influence. Creating three, four or five copies of themselves. At some point, this magical duplication became so common, and the experiments performed by these doppelgänger so paradoxical that it breached the fabric of reality, opening a pathway for Slaanesh, and the Spirefall.[3a]

In the aftermath of the Reinvention, new laws were passed to curb the excessive duplications. Outlawing the creation of more than two physical manifestations of the same soul in Iliatha and beyond. It has become a taboo to talk about these dark days when in polite society, and in some of the most devastated regions of Iliatha, even a single doppelgänger might causes ire in the local population.[3a][4a]

Yet, the Iliathan's fascination with twins and duality remains, from two-toned outfits, to many Iliathans training themselves to be ambidextrous.[4a]

While not excessive as in the days before the Ocari Dara, the military of Iliatha still boasts many twins, magical or natural. And even those not born from the same womb, share an intense soul-bond. It is common for iliathan twins to take up studies in different aspects of war, so to not fall into the trap of magical duplication of the dark days of the Spirefall. Often, twins will fight in the same warhost, but in different units. As a result, one Auralan Warden might instinctively know what their twin in a nearby Auralan Sentinel unit might be about to do. Giving an iliathan host an unprecedented level of coordination.[3a] This form of deep companionship even extends to those Iliathans without a twin. An Aelementiri might bound with one of the spirits of the lands, putting their relationship with their Aelementor at the center of their being.[3a] 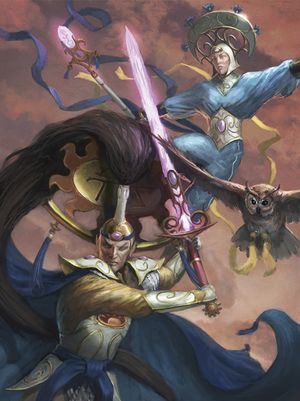