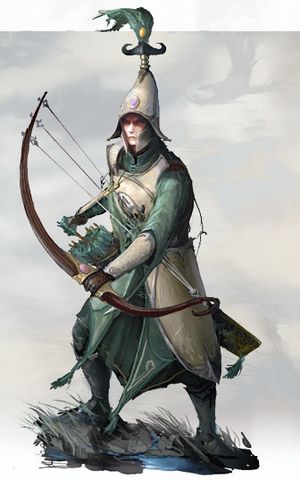 A Vanari in the colours of Helon.

Great Nation of Helon is a Great Nation of the Lumineth Realm-lords, located on the Helon Geosegment on the southwest of the Realm of Hysh. The Helonites living in these windswept lands are one of the Tyrionic nations who primarily base their culture on the teachings of Tyrion.[1][2a]

The Aelfs of Helon value speed and dexterity. Being highly competitive, the Helonites live for the thrill of being faster than everyone else.[3a] This manifests itself in the youth of the Nation climbing on the many floating Metaliths and throwing themselves into the racing winds that sweep across the land. Equipped with lightweight wings or flexibel patagia, or even stranger methodes like arcane, gravity-defying charms, these youths compete with each other, seeing who can go higher and faster than anyone else. But this is not a test of skill and agility alone, but also spirituality and charm. For the most successful racers are those that have bonded with one of the winds of the Realm, convincing them to carry them higher than they ever could by themselves. Many Helonites form livelong bonds with a Wind during these races. For its not the Helonites that have a competitive streak, but also the Winds themselves. Taking great pleasure in taking their champion higher and faster, outdoing the other Spirits.[3a][4a]

The greatest of these races is the Great Skyrace of Helon. Here, young Helonites wear dazzling kites and clothe designs and even use magical pyrotechnics to outdo each other.[3a] Many of the Lord-Regents of Helon were once victors of the Great Skyrace and have bonded with one of the zephyr spirits of the land.[4a] But where in Ages past, before the Ocari Dara a Helonite might have sought an alliance with the Spirits for their own entertaiment, the reverse is true now. Helonites offer themselves as supplicants to the Spirits. To earn back the trust that had been lost during the Spirefall.[3a]

The hosts of Helon are a force like no other. Ever-shifting vectors of attack, an enemy is forced to attempt to catch the wind itself. The Vanari and Hurakan of Helon work side by side to keep the enemy reeling and off-balance while a gale of killing shafts bring them down.[3a] Vanari and Scinari both practice a spinning and flowing form of martial art, that allows them to slip away from one foe, and strike another in a moments notice.[3b] While a host from Helon boast an abundance of Vanari Auralan Sentinel and devotees of the Hurakan temples, they are not always engaging their enemies at range. The marksmen of Helon pride themselves in leaving any enemy that manages to close in pin cushioned.[3b]

But its not just the Aelfs who march to war, the Spirits of the Wind are some of the most powerful of their kind. Even the mercurial Sevireth, Lord of the Seventh Wind, sometimes fights side by side with the Helonites. Their mutual distaste for Chaos bringing them together.[3a]

While Helon can not match the resilience of Ymetrica, or the magical might of Zaitrec, they are unmatched in speed and mobility. The Helonites pride themselves on how few of their numbers fall in battle. But in some Helonites, their competitive mindsets manifests itself in a disdain for those too slow or foolish enough to be brought down. Those that let them be caught by sword or claw deserved to be weeded out.[3a]

Its on the many floating Metaliths where the Helonites build their outpost. Grow their gardens, and work on their wondrous wind-powered devices that they trade with the other nations.[4a] Few of these settlements grow large, and all of them are nomadic, drifting together with the Metaliths that they are build on, even their capital city of Llai-Zephronia, the Singing Spire.[4a]

Its on the many floating Metaliths where the Helonites build their outpost. Few of these settlements grow large, and all of them are nomadic, drifting together with the Metaliths that they are build on.[4a] 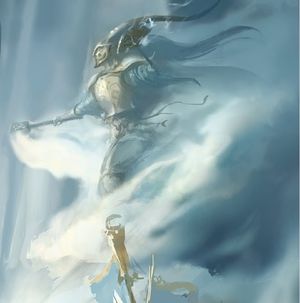