Great Nation of Alumnia is one of the Ten Paradises of the Realm of Hysh. It is located on the edge of the Tyrionic hemisphere, neighbouring Helon, Zaitrec and Xintil. Alumnia is one of the four Great Tyrionic nations who primarily base their culture on following the Tyrionic tradition, being heavily militarised and favoring sheer brilliance and swiftness of action, among other various Tyrionic notions.[1a][1b] 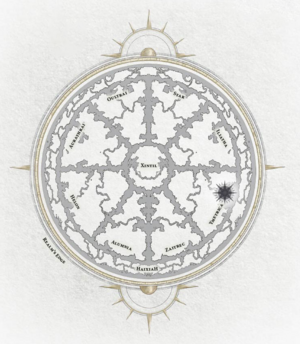 The Lands of Alumnia, located in between Zaitrec and Helon

The Aelfs of these lands are raised on the legends of Tyrion's exploits. The stories of how the Lord-Phoenix sailed the polychromatic waves of the Luminaris Sea, or slay the beasts that once haunted the lands that the Lumineth now call home.[2a] Each Alumnian posses a love for adventuring, exploring and daring feats. No Lumineth compare to the courageousness of the Alumnian, earning them the nickname of the 'Indomitables'. Once they seized their price, they will fight unflinching and with great valour to defend it. [2a]

Alumnia is one of the Tyrionic nations and as such the Alumnians, unlike their teclian cousins, value action over contemplation, martial arts over wizardry. They put a strong emphasis on survival skills and individual fitness. Alumnia is a harsh land, and the Alumnians have done little to tame their home. Instead, they see the deep dark forests and harsh cliffs that separate their scattered cities as an excellent training ground. The Alumnian youths are send on treks across their wild home by their elders. So that they learn to be self-reliant, or perish. Based on this, it comes to no surprise that it is the Alumnians that excell in the olympiade known as the Contest of Paragons, held every decade in Xintil.[2a]

The Alumnians are unparalleled explorers among the Great Nations. They believe that enlightenment will come to those brave and determined enough to seek it out. Many Alumnians live in the wilderness outside of their larger cities, will others travel even further. Daring the wilderness and dangers of far-away lands. While many Aelfs have perished on these daring journeys, the knowledge that the survivors brought back has proven invaluable, and Alumnia has become known across Hysh for their heroism.[2a]

Some Alumnians even strive to emulate the legend of Tyrion as he journeyed across the Luminaris Sea to the searing landscape of Xintil, gaining great insight in return for his eyesight. The most experienced explorers of Alumnia travel to the perilous lands of the unstable Haixiah. Few survive this ultimate test, and those that return have become blinded, but their other senses greatly heightened. These Alumnians are greatly revered in their homelands, gaining the title of Luminarians.[2a]

Even in death the Alumnians do not rest. They belief that their souls pass on to the aelven underworld floating high above the lands of the Realm of Shyish, journeying the lands once more.[2a]