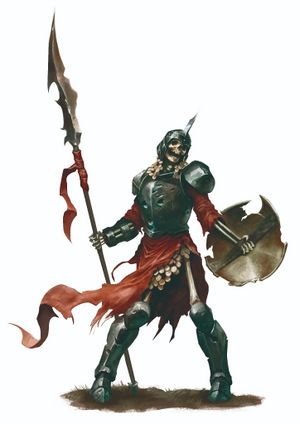 Grave Guards are Deathrattle champions, elite infantry from tombs and barrows who march and slay in perfect formation. They are equipped with ensorcelled blades and ancient relic armour.[1][2][3b]

They are led by Seneshals and supported by Standard Bearers and Hornblowers.[2]

Grave Guard are honoured warriors who have swore eternal service to their ancient rulers and have returned from the dead to fulfill that promise. [5]

Grave Guard usually retain enough of their memories and personaility to enable them to reminisce with their rulers about the days of yore as well as carry out their duties. [5]

Grave Guard are elite champions and housecarls of the Deathrattle Kingdoms and bands of them accompany their Wight Kings. In life, they were the most deadly and trusted warriors of their lords, laying down their lives in service or taking oaths of eternal service, pacts that were taken most literally in Shyish and realms that felt the touch of the magic of death. They were buried in great sepulchres and spell-warded barrows and when their kings and emperors were resurrected as undead wights, so too were the Grave Guard. They retain more individuality than the average Deathrattle, but still limited to their duties and indulging their monarch’s desire to reminisce about their mortal days.[4]

In battle the Grave Guard form the immovable anchor of a Deathrattle battleline with skill honed by centuries of warfare. When left to their own devices, they keep watch from the alcoves of their mausoleums and barrows, killing intruders with clinical efficiency. Even many vampires are impressed by the Grave Guard and choose to raise such warriors into service, the walls of their sinister keeps are eternally patrolled by bands of these custodians.[4]

In life they were given the richest pleasures and most noble status as a reward for their service and in death such favour manifests in their superior wargear, weapons and armour adorned with fell enchantments and glow with an eerie light. Their blades, called Wight Blades, are cursed and ensorcelled woven with the magic of darkness and despair, allowing them to pass through even rune-forged Chaos Armor each killing strike sever the connection between soul and body, blasting it into the underworlds of Shyish. One-handed Wight Blades are paired with Crypt Shields or two-handed Great Wight Blades. Their armour is ancient relic armor.[2][3a][3b][4]