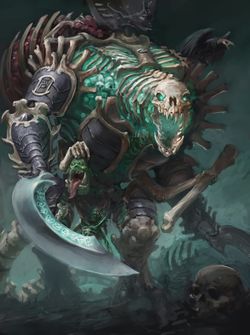 Gothizzar Harvesters are monstrous juggernauts of bone and metal created by the Ossiarch Bonereapers as both weapons and collectors of the dead. These constructs are surrounded by the terrible miasma of death and have many limbs to tear through infantry formations and then collect their remains for later use. In combat they are often used as line-breakers by the commanders of the Ossiarch military, who see it in terms of might more than resource.[1]

In battle while they cut apart and crush the foe with their primary limbs and powerful maws, they gather up the remains of their kills with the subsidiary arms that line their chests and flanks which strip away flesh and assess the worth of each remnant before depositing the choicest picks in vast ribbed baskets atop their backs. Sometimes these bones attract carrion birds which either swatted away by rear arms or torn apart and added to the collection if its bones are judged sound enough for re-use. While the mass graves upon their backs are intended to be carried back to Ossiarch construction nodes or Mortisan strongpoints for the construction of new constructs, when needed Mortisans may draw forth the bone from each rib-like feeder heap whilst it is still warm and slick with fluids to create or reinforce their legions.[1]

At its fore is a Death’s Head Maw that vomits the spiritual by-product of the corpses gathered in a greenish fireball of tortured spirit-energy. Its elongated prehensile spine while intended to gather the remains of the slain, can also be used to attack nearby enemies with such force it smashes their bones to flinders. [1]

The primary limbs can be equipped with either a pair of Soulcleaver Sickles or Soulcrusher Bludgeons. Soulcleaver Sickles are kept eternally sharp by Shyishan magic allowing them to effortlessly cut through entire ranks of enemies in one swing. Soulcrusher Bludgeons are filled with reservoirs of magical Chamonite allowing them to tear apart incorporeal foes or blast the soul from a mortal’s body, leaving the displaced spiritual energy as ready fodder for nearby Mortisans, while the corpse is torn apart and stored atop the beast’s broad back.[1][2]