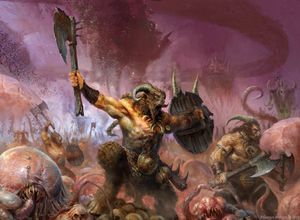 A group of Gor Warriors.

Gor Warriors are Gor infantry of the Brayherds. They are filled with feral rage, gathering in massive herds and then charge towards their enemies wielding crude, brutal weapons to rend and hack the flesh of their foes. This is especially true in large herds or when close to a Brayherd hero, feeding on each other's rage to strive to outdo their kin in combat.[1a][1b]

Units of Gor Warriors are led by Foe-Renders, supported by a musician with a Brayhorn and a Banner Bearer.[1a][1b]

Gor Warriors go to battle armed with pairs of Gor Blades, that allows them to strike in a frenzy, or a Gor Blade paired with a primitive Beastshield, allowing them to defend themselves.[1a][1b]