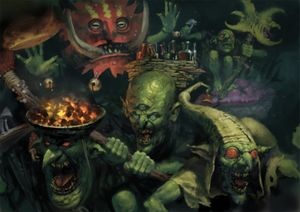 The dangerous Grots of a Moonclan Gobbapalooza 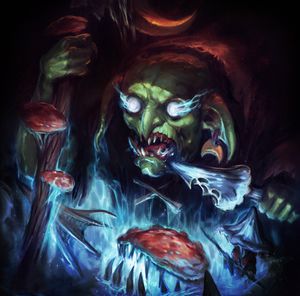 A Gobbapalooza is a gatherings of so-called wise-grots, petty shamans and gabbling loonpriests of the Moonclan Grots who takes it upon themselves to counsel their skrap's boss whether he wants their advice or not. [1]

All Gobbapalooza shamans drink long draughts of hallucinogenic fungus brew before the battle begins, making them almost impervious to pain but as the battle progresses the effects start to wear off. Despite their abilities these shamans are slippery gits and seek to put as many of their fellow grots between themselves and incoming enemy fire as possible.[2][3][4][5][6]

Boggleyes are demi-shamans with powers of hypnotism. They chant hypnotic mantras while revolving their pupils in an unlikely and hypnotic fashion, turning both friend and foe alike into drooling, glazed-over puppets. While enemies are turned into slow-witted imbeciles a Boogleye can also mesmerise friendly warriors to stand firm against whatever foe they face. [2][7]

Brewgit capers into battle with weird magical fungus potions which he churns out for his loonshrine still. He peddles his most potent might-enhancing brews to those grot heroes that can afford them in the midst of battle. Although they fill the drinker with the might of an angry gargant, the effects are shortlived and are also highly addictive [3][7]

Scaremongers dress as Glareface Frazzlegit, riding upon grot-borne squig's skulls representing Boingob, a godbeast that was immolated while trying to devour Hysh. Scaremongers radiate waves of supernatural fear that scare nearby grots into fighting with renewed vigour. When threatened a Scaremonger can use the Tusks and Fangs of the squid skull representing Boingob to defend himself. [4][7]

Shroomancers experience such vivid fungus-brew hallucinations that their magics spill out to animate the fungi around them and bring their visions to life. Thus they are surrounded at all times by comically animated swarms of ambulant fungi. They ride upon spore-belching bloatstools, which can release clouds of magical spores that engulf the enemy when stamped upon by the Shroomancer. They are surrounded at all times by flapping, bouncing and often gleefully burbling swarms of ambulant fungi. [5][7]

Spikers go to battle with basket of poison bottles lashed to their backs, which they hand out to those allies that wish to tip their blades in lethal poisons. This they do by grabbing bottled poisons from their back-basket and making a show of anointing nearby grots' weapons with them, chanting mumbo-jumbo spells to render them 'extra-nasty'. However he saves the nastiest of poisons for the barbs of his scorpisquig stikkas. [6][7]