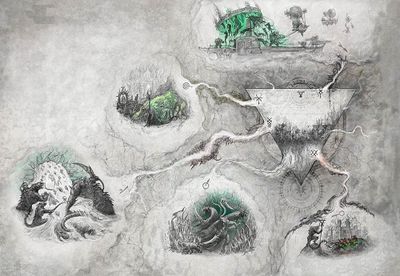 Gnawholes extending across the Under-Empire

Gnawholes are uncanny burrows that tunnel through the fabric of reality, bridging the void between the Mortal Realms[1]

Unlike other races, the Skaven are able to use Gnawholes to move between realms without the use of a Realmgate with the added safeguard that they are lethal for any but the skaven to use due to their dangerous, chaotic energies. [2]

In the Age of Myth, the Verminlords shared the knowledge of how to create Gnawholes with the Skaven.[2]

During the Age of Chaos, Clans Shrykt dug an vast gnawhole in the Realm of Aqshy and plunged into its depths - Neither the Great Clan or the gnawhole have ever been seen again. [2]

Even before Sigmar unleashed his forces into the Mortal Realms, operatives of Clans Eshin were able to spy on the God-King’s throne room, returning to report to their mysterious master through a hidden gnawhole.[2]

Each of the rival Great Clans have their own secret and arcane means of creating a gnawhole. Clans Pestilens create virulent plagues that can chew through reality itself whereas Clans Skryre use technology - gigantic reality-piercing drills. Like many Skaven technologies and magic, gnawholes are somewhat unpredictable causing many skaven to perish when a gnawhole accidentally burrows into a volcano or ocean. [2]