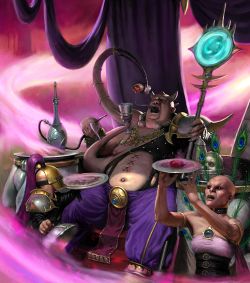 Glutos Orscollion, Lord of Gluttony is a monstrous champion and formidable Wizard of Slaanesh who has gorged on nations and leads a vile parade of gourmands and sycophants devoted to appeasing his endless hunger, riding upon an opulent palanquin.[2][3][4b]

Below is a list of titles Glutos is known for:

Glutos has glimmering piggish eyes and an overlong tongue slobbers across drool-covered chins. His body is hideously swollen and from it emerge tentacles and other signs of Dark Prince's blessings.[4b]

The Orscollions were once a clan of failing merchants from Hysh and Glutos was forced into thievery and even infiltrated the temple of the Cornucopean Rite in Xintil and stole its sacred golden grain.[4b] However he was under-fed and starving and his willpower was not great and thus he ate the grain. The rite was secretly devoted to the Slaaneshi Daemon Prince Loth'shar[2] and Glutos was suddenly wracked with a terrible hunger that could only be sated by consuming something even grander than the daemon's treasure.[4b] Orscollion squandered every stolen coin on increasingly outlandish foodstuffs but was without success. It was then he discovered a body left to rot in the back alleys of one of Xintil's cities and guided by Loth'shar's mocking whispers he fed upon the corpse weeping at his own foulness. In that moment the shade of Loth'shar appeared before him, assuring Glutos that his path and promised to banish his hunger as long as he pursued more esoteric treats.[4b]

In Hysh, wizards were abundant and the more mages Glutos feasted upon the greater the favour Loth'shar bequeathed upon him and with his corpulence grew so did his fame.[4b] Hedonites travelled from across the realms to pay tribute, bring various offerings for the chance to feast at his side. Towns were massacred, trading caravans raided, and even armies routed to feed Glutos' dark cravings until consumption became an end unto itself, and even morbidly obese daemon-epicures came to seek out Orscollion and his carnival, to dine on tormented souls.[4b] 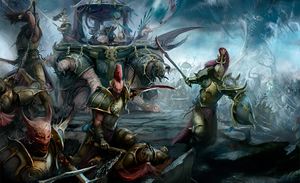 With the reawakening of Slaanesh in the Mortal Realms, Glutos now leads a cadre of Hedonites consisting of both Mortal and Daemonic units, reinvigorating his horrific legend.[4a]