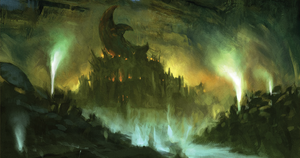 Gloomspite Gitz are a loose coalition of Moonclan Grots, Spiderfang Grots and Troggoths united by their worship of the Bad Moon alongside Aleguzzler Gargants who are attracted by the offer of brews. They seek to bring about the Everdank, an era perpetual twilight of moistened befoulment that would see the the Gloomspite Gitz conquer the surface worlds in Gorkamorka's name.[1]

During the Age of Myth both the Moonclan Grots and Spiderfang Grots settled the dark corners of the realms. Known for their cunning during the Age of Chaos after major defeats many grot tribes vanished into boltholes after where they could weather the storm. Moonclan Grots shun daylight and it burns their skin and hurts their beady eyes. They worship the celestial abomination known as the Bad Moon, and it is from this they received their name. Thus they were happy to vanish into their lurklairs, breeding squigs, cultivating weird mushrooms and raiding the surface only for the juiciest of quarry. These sentiments were also shared by the Spiderfang Grots whose entire culture revolved around the veneration, rearing and riding of myriad species of arachnid beasts. As these beasts thrive in darksome and dingy conditions, the Spiderfang Grots began to make their lairs in paces such as ravines choked with tangled woodland, foetid jungles and swamplands, cave networks and temple ruins so huge that they support their own micro climates. Troggoths, too, thrived in the dampest and foulest reaches, where primordial gunge accumulated and troggoths spawned.[1a][2a]

During the Age of Chaos these disparate gloom-dwelling factions spread far and wide, digging crude fortifications into cave mouths, raising fungus-lit shanty-cities amidst the shadows, and breeding ever stranger and more dangerous strains of squiggly beasts and peculiar insects. Occasionally the grots would break into the lower levels of a Fyreslayer magmahold or Skaven burrow resulting in underground wars that resulted in the destruction of Moonclan lurklairs or the establishment of new lairs amidst the ruins of conquered civilisations. The Moonclan Grots also came across Spiderfang broodnests and trogg holes which resulted in occasional bloodshed but as grots are less inclined towards violence than the Orruks, they often found a common cause. The Moonclan fungi and potions were greatly prized by the Spiderfangs who offered hallucinogenic or poisonous substances milked from arachnid beasts that were useful for the Moonclan shamans. Soon tentative truces and barter economies turned into shaky alliances when both realised that together they could defeat enemies that seek to drive them off creating the first Gloomspite hordes.[1a]

With the dead rising in unprecedented numbers and wars being waged for souls and the rulership of eternal underworlds, the Bad moon has become much more active. While the entity always traveled the Mortal Realms, spreading mayhem, destruction and insanity, now it careens like a runaway boulder through the void. Following the moon comes the Gloomspite Gitz, affected by the "Gloomspite" they seek to please the moon to bring about the Everdank.[1a]