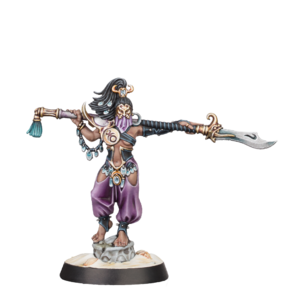 Glissete is a Slickblade Seeker and a member of the Dread Pageant warband.[1a][2] Every move she makes in an entrancing dance to which music only she can hear.[3]

Glissete and the rest of her warband, the Dread Pageant, pursued visions of their missing deity Slaanesh into the Beastgrave. Within the sentient mountain they gained an obsession with tormenting it, by denying their victims of their death and torturing them to as close as possible to it. The anguish at being denied its usual feast of flesh caused the mountain to despair, which filled the depraved mortals of the warband with glee. They descended to the Direchasm where the mountains emotions are at its rawest and most tangible, filling them with euphoria as they further torture the mountain.[1a][2]

She is armed with a dazzling Slickblade Glaive.[2][3]