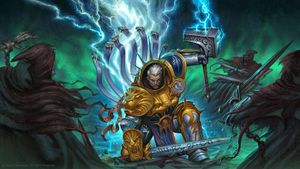 Gardus Steel Soul is the Lord-Celestant of the Steel Souls Chamber of the Hallowed Knights Stormhost.[7a]

Known as Garradan in his mortal life, he devoted himself to the care of the sick and the cursed of Demesnus harbor in his hospice of Grand Lazzar. As the Age of Chaos fell onto Demesnus in the form of the Skinstealer tribe that attacked his hospice, he was forced to fight back. Though this moment would be retold with many embellishments in the Age of Sigmar, in truth Garradan took two iron four-foot candlesticks and fought back against the plague that had violated his patient's sanctum. He did not kill the hundred, by his own admission, not even a dozen, that the stories claim. Garradan was cut down by a spear in the back, a prayer to Sigmar on his lips. There and then Gardus was born and lifted onto the Anvil of Apotheosis.[2][3]

Lord-Celestant of the Steel Souls

Following his Reforging into a Stormcast of the Hallowed Knights, Gardus quickly caught Sigmar's eye and was risen above to Lord-Celestant of the Steel Souls Chamber.[2]

At the beginning of the Realmgate Wars, Gardus and the Steel Souls were sent to Ghyran to free the Gates of Dawn from Nurgle's grip. The battle was fierce as the gate was corrupted and led to Nurgle's Garden. This allowed the Great Unclean One Bolathrax into Ghyran. As all seemed lost Gardus knew the only way to win was to close the Realmgate and stop the enemies' reinforcements. To that end, he dueled Bolathrax alone, but every wound he gave Bolathrax recovered. Seeing no other option Gardus flung himself into the portal. Bolathrax attempted to follow but his great girth proved his undoing when he attempted to follow through, he broke the Realmgate. Gardus was trapped on the inside of the garden for some time but soon escaped.[1]

After returning Gardus revealed that he had found the location of Alarielle. He and several Stormhosts set off to Athelwyrd after going through Rotwater Blight, clearing the Oak of Ages Past and cleansing the River Vitalis. Upon reaching Athelwyrd they realized they had been followed by armies of Chaos allowing their corruption into Athelwyrd and Alarielle's Verdant Palace. There Stormcast Eternals and Sylvaneth fought the Battle for Athelwyrd. They were soon driven out with Alarielle transformed into a Soul-Pod and Gardus was slain and Reforged.

Together with the Anvils of the Heldenhammer under Lord-Celestant Thaddeon ven Denst, Gardus and parts of the steel souls were dispatched to the great Green Torc in the Scabrous Sprawl. There they were lured by the beastmen into a trap in Arachnias and where they were surprised by Spiderfang Grots. Gardus ordered Thaddeon to leave to continue the mission while the steel souls held the grots back. [7a]

After losing battles with the Grots under their chief Spitterakk, Gardus gave the order to break off the fight and jumped with the few remaining men from the edge of the torc [7a]

Into the Plague Garden

Following the rebirth of Alarielle into her war aspect and the subsequent reclamation of much of Ghyran, Lord-Castellant Grymn led the Steel Souls into the Plains of Vo.[5] There they helped the Sylvaneth destroy the corrupted city of Gramin.[4] Then the Steel Souls moved on their real target in the Verdant Bay, the Sargasso Citadels. While Grymn assaulted the citadels from the gate, Gardus and the Steel Souls' Reforged brethren including an old foe, Torglug the Despised now Tornus the Redeemed, came from above their combined might shattering the Order of the Fly's forces holding the Citadels. In a last-ditch gamble, the leading knight defending the citadels, Bubonicus, gave his life in order to connect the Realmgate, the Gate of Weeds, underneath the citadel to Nurgle's garden. He succeeded but by then the Steel Souls had secured the citadels and Grymn was sucked in trying to close the gate.

With the Genesis Gate closed and much of Ghyran returned to the control of Order, Sigmar turned his gaze to Shyish. While Sigmar was readying for that Gardus used the time between battles to return to Demesnus. There he discovered he was being worshipped as Saint Garradan by some Sigmarites who had taken up residence in the ruins of his hospice. While he was there Gardus slew an agent of Nurgle who was cultivating a Daemon of Nurgle underneath the ruins of his hospice.[3]

Gardus returned to Sigmar's side and led the armies of Azyr into Shyish to the former city of Caddow, the sister city of Nordrath in Azyr. There Gardus led the defense against Bakhos a Chaos Lord of Slaanesh in the service of Archaon charged with overseeing this land. He was drawn away by Ramus a disgruntled Lord-Relictor of the Bullhearts chamber, who left with Mannfred to free Tarsus Bull-Heart from Nagash. Bakhos also tracked the Lord-Relictor and all three fell into conflict at the gates of Nagashizzar with the Dead and each other. The fighting attracted the attention of Nagash who opened the gates and quickly killed Bakhos. Then Mannfred and Gardus tenuously negotiated for the return of Tarsus, now broken beyond imagination, and the lands of Caddow in exchange for having killed some of the Chaos warriors around Nagashizzar. Both Nagash and Gardus let Mannfred go and Ramus killed Tarsus, returning his soul to Azyr. Gardus and the Stormcasts that remained left to return to a now secured Caddow, renamed Gravewild.[6]