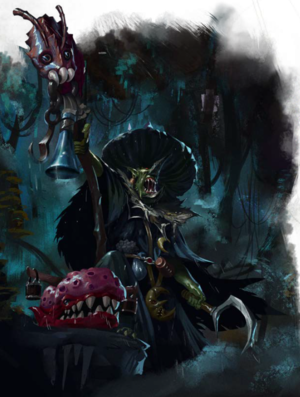 Fungoid Cave-Shaman are Moonclan Grots that lead their greenskin brethren into battle, lunatics that get lost in manic hallucinations to grow closer to the side of Gorkamorka that epitomises cunning and trickiness over brute strength, the one favoured by grots. Even before hosting colonies of fungi that produces a toxic cloud of spore around them, these mushroom-gobbling grots were already mentally unstable. They are guided by manic visions of carnage gifted by the cunning but brutal side of Gorkamorka or as an side-effect of ingesting too many Deffcap Mushrooms.[1] The main weapon of Cave-Shaman is a Moon-sickle. Also Cave-Shamans often have a Spore Squigs as their pets. When they get kicked, these squigs exudes clouds of thick green spores, effectually hiding their masters from sight in battle. The Spore Squig can also bite the enemy.[2][3]

During the Time of Tribulations Cave-Shamans led the hordes of the Grand Alliance of Destruction to the Realm of Shyish in search of the Waaagh! to end all Waaaghs!.[1]