From Age of Sigmar - Lexicanum
(Redirected from Fleetmaster)
Jump to: navigation, search 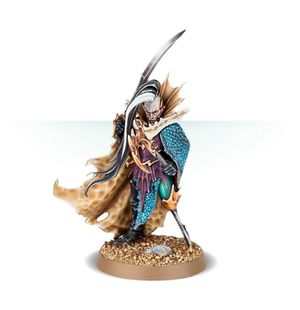 Black Ark Fleetmaster are Aelven leaders of Scourge Privateers. They are corsair lords, rulers of the high seas who command the Black Arks and the marauding fleets, directing the corsairs to slaughter their enemies without mercy. They are also master duelists and swashbucklers, peerless swordfighters who take great delight in seeking out challenging rivals to defeat in personal combat.[1b][2][4]

Known for being extremely ambitious and independent, many Fleetmasters chafe under the rule of the God-king Sigmar and prefer pursue their own interests upon their floating fortress-cities known as Black Arks that are usually closed off to outsiders except their prisoners. They run various mercantile ventures, trading various monsters and their body parts but they also engage in the slave trade by exploiting loopholes in the Azyrite decrees banning such trade. During raids Fleetmasters leave their Black Arks and instead take command of faster frigates and wolfships.[1b]

Black Ark Fleetmasters are often armed with a Black Ark Cutlass and a Murder Hook. The Sea Dragon Cloaks made of scaly hide protect them from arrows and other projectiles.[1][2]

Wearing drakeskin cloaks and vibrant silks they are flamboyant but are also ruthless and cruel-hearted, taking great joy in slicing their foes apart piece by piece using their mastery of the blade and decades of experience in fighting on slick surfaces.[1b]

In the Age of Sigmar Zarkland Zenthe formed the Twilight Cabal, a group of Fleetmasters from across the Mortal Realms who seek to revive the ancient Scourge empire. [3a]. A number of Fleetmasters are also part of the Blackscale Coil, the shadow council that rules the city of Anvilgard. [1a]