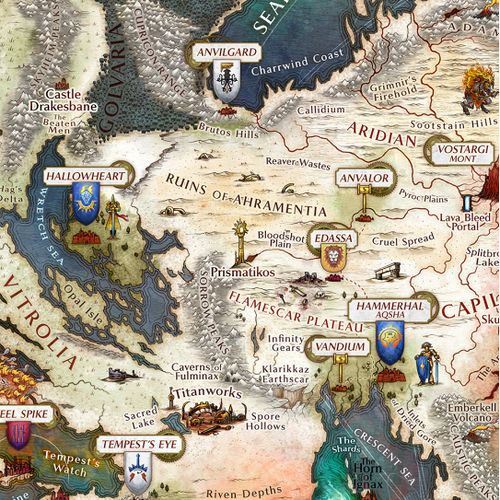 Flamescar Plateau is a contested region in the Great Parch in the Realm of Aqshy.[1]

It is border to the west by the Wretch Sea and to east by the Crescent Sea, sometimes known as the Searing Sea. On its land borders there is Vitrolia to the West, Khul's Ravage to the south, Capilaria to the East and Aridian and Golvaria to the north.[1][3b]

The plateau was once ruled by the Agloraxi Empire - a hugely powerful mageocracy that had vast machine warriors and weapons capable of burning entire continents.[2]

Wanting to avoid a wasteful tribal war, the Flamescar sends their champions to fight in the Red Feast. This event results in a invasion of Daemons in the Great Parch.[3a]

As Daemons of Khorne invade the Great Parch, the tribes of Flamescar and other regions are forced to battle them. Many of these tribes turn to worship of the red gods to survive the slaughter or sate their savage lusts.[3a]

The Bonesplitterz of Klarikkaz Earthscar fight a guerrilla war against the daemons coming from the Clavis Eye. They are slowly driven back to the depths of their canyon, while their prophets pray to Mork for a way out.[3a] 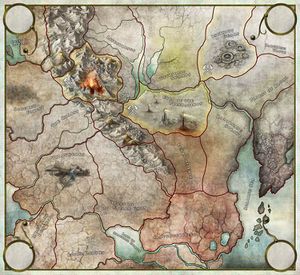 A list of known locations in the Flamescar Plateau are:

Off its coast there is the following isles: