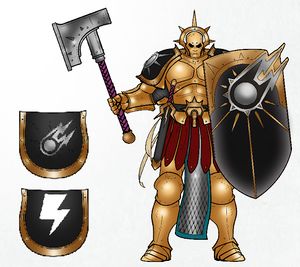 A Liberator of the Fists of Sigmarite.

The Fists of Sigmarite are a Stormhost of the Stormcast Eternals, wearing gold and black armour. They are a bold Stormhost, seeking to be the first to take glory and involve themselves in heroic deeds.[1]

The Fists famously fought against the Gorehost of Vorgaroth, where their leader Vardus Balestorm was defeated in single combat by the Chaos Lord, only to be slain in turn by the Daemon Prince, Ra'korlash. Though defeat seemed imminent with the death of their leader, the resulting duel between Vorgaroth and Ra'korlash allowed the Stromhost to seize victory.[3]