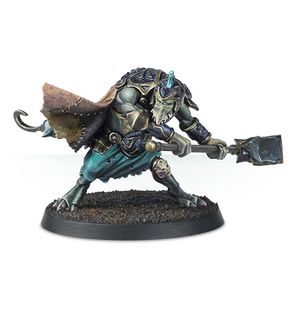 Fimirach Nobles are loathsome and ferocious Fimir leaders that lead the Warriors of the Fimirach into battle. They have a tougher hide and a stouter build than their kin. Their cunning intellect makes them the ideal leaders for a band of Fimir Warriors, able to direct them to exploit the weaknesses of their foes.[1]

Like other Fimir, a Noble despises light and wrap themselves in sorcerous mists, have unnatural flesh that twists and writhes to seal wounds moments after they are inflicted and at the end of their muscular tails there is a natural bone club that can smash with bone-breaking force.[1]

These creatures are born to lead and marked for greatness, chosen the moment they hatch by the Fimir Matriarch of their stronghold. As such they are raised into deadly killing machines and well-versed into the intricacies of warfare.[2]

They are armoured with plates of spell-forged bronze fit to their bodies for protection. For offense they wield Baleglyph weapons, etched by Balefiends and imbued with vile magics, either as great double-handed mauls, single-handed maces or curving hatchets that bring withering atrophy to anything it touches.[1][2]