From Age of Sigmar - Lexicanum
(Redirected from Fimir Warriors)
Jump to: navigation, search 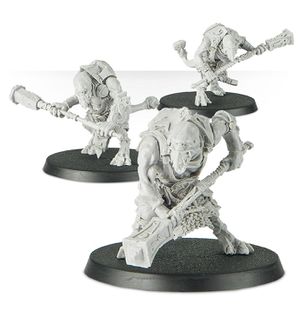 Three miniatures of a Fimir Warrior.

Fimir Warriors are infamously degenerate and malign Fimir warriors of the Fimirach, possessing of prodigious strenght and tenacity. Their unnatural flesh is filled with dark magic and is ageless, which means if not slain they will quickly heal any wounds. As with all other Fimir they despise the light and only move from their hiding places when shrouded in sorcerous mists. This has the additional benefit of hiding them from their enemies.[1][3a][3b]

These units are led by Fimirach Nobles and supported by Banner Bearers and Hornblowers.[3a]

They are armoured with plates of spell-forged bronze fitted to their bodies and wield Baleglyph weapons into combat, either as great double-handed mauls, single-handed maces or curving hatchets. These Baleglyphs, etched by Balefiends, are saturated with vile magic and bring withering atrophy to anything they strike. At the end of their muscular tails there is a natural bone club that can smash foes with bone-breaking force.[1][3a][3b]

The Fimir Banner Bearers carry banners with potent and malign magic, capable of draining an enemy of their bravery. This power is granted by the glyph symbols of the Meargh Matriarchs of the Fimir.[3a]

Fimir warriors can blow hunting horns that when blow summons an eerie wail that has spelled doom for many down the long ages.[3a]