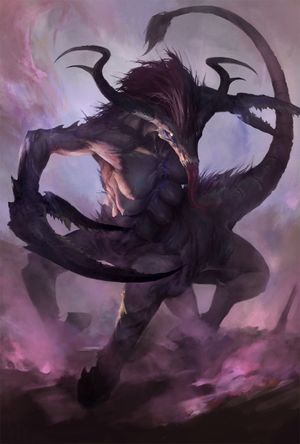 A Fiend of Slaanesh surrounded by its soporific musk.

Fiends of Slaanesh are daemonic beasts created by the Chaos God Slaanesh.[1a]

They are formed in the chaos-induced dreams of mortal and then given shape by Slaanesh.[1a]

They look like an unholy mixture of physical creatures and writhing nightmare, combined into chimeric being. Their head is sleek and draconic, sprouting long horns, rows of insectile spines or shocks of vibrant hair. Their lower limbs are two pairs of legs that resemble those of a human, one facing forward while the one on the back faces backwards. Their arms end in enormous pincer-like claws. Their formidable tails that waving sinuously behind the creature are both barbed and end in a poisonous stinger.[1a]

They pursue those who refuse Slaanesh's intoxicating embrace with their unnatural speed. When they get close enough for the kill they release a keening song, a haunting discordance interwoven with melodic rifts and throbbing base notes. This aetheric hymn and lullaby resonates through the veil and reach into the Palace of Pleasure, entrancing those daemons in Slaanesh's Domain. This song can echo long after battle, some even lasting for years to come, a song of the agony and ecstasy of battle.[1a]

They are unnaturally swift, moving with a scuttling gait that is strange. Their tails can lash out with enough force to crack open plate armor and their stinger is filled with a potent venom that brings agony and death.[1a]

These daemons look repugnant, but they are surrounded by an unnatural soporific musk, that attract and immobilizes their prey with its narcotic properties, pleasing only for their enemies. This heady fragrance laces thought with rapturous of hallucinated visions. Those with the most hypnotically potent musk are known as Blissbringers, able to turn stoic warlords into carefree dreamers, drunk with ecstasy and unable to defend themselves. This musk is so strong only superhuman feats of willpower have any hope resisting its bewitching effect. Those who manage to survive will never be the same, recalling very little of the experience and those who do recollect it invite insanity into their minds, left dim with impressions of writhing limbs, long, lashing tongues, inhuman squeals of delight and impossible faces contorted with the ecstasy of pain. Worst than that is the overwhelming sense of suffocation that haunts them when they are awake filling their heart with dark desires and irresistible urges that lead towards destruction.[1a]

The song the fiends create during battle is exceptionally disruptive to those trying to wield sorcerous energies. The rapid shift of scale pitch is not only distracting it causes eyes to vitrify, noses to bleed and eardrums to burst.[1a]

Fiends of Slaanesh tend to use their soporific fragrance to make enemies discard notions of combat, strategy and survival for drifting in a sea of delirium. Then they swoop in and slaughter them with their razor-sharp claws like a wafting breeze. Very few of their foes put and semblance of a fight.[1a]

Blissbringers, those Fiends of Slaanesh with the most potent musk and venom, are the leaders of packs of Fiends during wars.[1a][2]