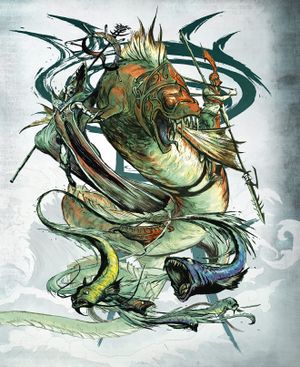 Fangmora Eels are feared deep-sea hunters who are able to split a man in half with their tooth-reinforced jaws but can also cut off the arm of a gargant. They use their speed and snake-like bodies to chase after their prey on the stony bottom of the sea or in underwater caves. In addition to their bite, Fangmoras can deliver whipping blows with their tails and also have the ability to give off electrical charges that stun even larger prey. [1a]

The Idoneth Deepkin have attempted to catch and tame Fangmoras since the early history of the Enclaves. Many Akhelians lost their lives trying as it proved impossible to break their will. Eventually the task was left to the Isharann, who subjugated the Fangmora's mind with their magic. They have been used by the Akhelian Guards of most enclaves ever since. [1a]