From Age of Sigmar - Lexicanum
(Redirected from Exalted Greater Daemon of Nurgle)
Jump to: navigation, search

Great Unclean Ones are Greater Daemons and the mightiest of the Daemons of Nurgle that look like humongous hillocks of rotting flesh that tower over enemies of the Plague God.[1][2a][2b][2c]

Their very visage celebrates the corpulence of Nurgle with rotten and torn flesh and their enormous exposed guts revealing their winding intestines. They can have symmetrical antlers, foul grin, cyclopean heads and hideous tongues capped off with a sinister daemon head. [1]

These Greater Daemons treat the lesser Nurglites, be they mortal or daemon, in a fatherly way and take great pride in their achievements.[2c] 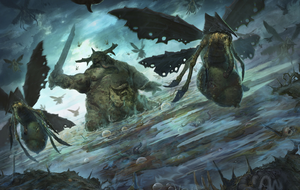 A Great Unclean One surrounded by Plague Drones despoiling a river with his presence.

Great Unclean Ones have many abilities and have a huge amount of versatility in battle.[1][2a][2b]

They can swing massive rusted weapons into battle to smash their foes, Bileblades or Plague Flails on the left hand or Massive Bileswords or Doomsday Bells on the right. Not only that but their Noxious Bile is also a dangerous weapon in battle, able to vomit it in a stream of filth. Around their feet teem hosts of Nurglings that will attack anyone that gets too close with their razor-sharp teeth.[1][2a][2b]

They sheer bulk is easily able to barge down fortress gates and crush and asphyxiate enemies, even if such foes are monstrous beasts, beneath it, especially at the end of their devastating charges. Their sheer size does not only provide offensive capabilities but also defensive ones, as a layer of blubber gives them such a resilience that make it hard for anybody to wound them, and if they succeed they are likely to be faced with a spurt of acidic bile and putrid toxins. Like all servants of Nurgle they exude waves of disease and decay that diminish both enemy and environment alike and can easily regenerate from wounds inflicted upon them thanks to Nurgle's gift of fecund life.[1][2a][2b][2c]

They are masters of strategy and able to inspire fellow Daemons of Nurgle with a single command, making them formidable generals, but also superb spellcasters of magical plagues and diseased magics. Those that wield the Bileblades can also offer their own rotting guts to the Plague God to enhance their casting ability and those that toll their rusted Doomsday Bells can call upon fresh plague daemons from the Garden of Nurgle. Noteworthy among their spells is the Plague Wind, summon a whirlwind of maggots and filth that spews forth, capable of healing Nurglites and sickening everybody else, which can be further enhanced by a trio of Great Unclean Ones, known as the Thricefold Befoulment.[1][2a][2b][2c][3]