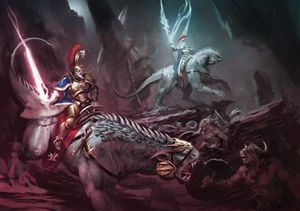 Evocators are mages of the Corpuscant Conclaves of the Sacrosanct Chambers that embody the tempest's energy. But unlike the Knight-Incantors they absorb this energy to themselves causing their eyes to flash while their veins glow beneath their skin. This energy players over their Tempest Blades and Stormstaves and arc outwards in deadly bursts that can scorch anyone nearby unless carefully channeled. This energy can also be used by the Evocators to empower their fellow Stormcast Eternals. [1a]

In battle rains of arrows that fall upon the advancing Evocators are burned from the skies by the stormbolts that arc between the weapons and when they reach the foe they unleash a storm of interweaving blows that are not only impossible to avoid but also releases the captive energy in the weapons to burn them to the bone before returning to the weapons. The most battle hungry ride upon Celestial Dracolines whose charge can fell a mournfang with such force that its fellow will flee in panic. [1a]