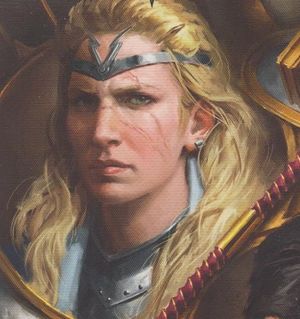 Esselt the Braelander was a Witch Hunter of the Order of Azyr in the Realm of Chamon. [1]

A tall blonde woman with creamy but scared skin, she was usually clad in armour and a white cloak. She carried a silver great sword, blessed by High Priest Crautreic. [1a]

Her father was the scholar and sorcerer, Leukon also in service to the Order of Azyr.[1a]

She and Talacan fought and defeated the Zombie-Master of Rodeil, but never found his body. [1b]

Esselt, Talorcan and Dromech discovered cultists of Nurgle in a caravan crossing the desert in Droost, they killed six of them but the seventh escaped and led them on a long hunt. Subsequently they found the carnage at Tal's brother, Urgant Fairhair's chapter house bastion at Raga Tor.[1a] Clues led them to conclude that the village of Vika Skor was linked to the nurgle infestation and signalled for reinforcements.[1b]

Witch Hunter captain Maelchon joined them with nineteen black clad witch hunters and together they attacked the tainted village [1c] and managed to capture the cult leader there then took him to Orgam Kor for interrogation [1d]. Discovering that the heart of the corruption was named Morteval and he was currently at the oasis of Gharnox Kar [1e] they joined a major expedition of the Order to cleanse it. [1f]

During the fight, Esselt is bitten by a fly and when she smashes it, she crushes it into the wound, tainting her flesh with mark of Nurgle, soon the infection and taint began to spread. Returning to Orgam Kor to try and find a cure they are confronted by High Priest Crautreic himself who had seen the future through the Azyrian Eye and would have killed them both if not for the intervention of Leukon. [1g]

They flee and head for the sacred spring at Bahgan Tuhl where she bathes in its healing waters but to their horror it does not cure her but rather corrupts the spring itself. Sigmar casts down Lord-Veritant Velthur to deal with those who have defiled the sacred waters and in the ensuing conflict her father is slain, the couple only surviving when the hydra Nemisaur awakes and attacks Velthur. [1h]

Fleeing again they return to Gharnox Kar hoping to follow and capture Morteval who had escaped through a Rotway, a corrupted realmgate. Passing through it they find themselves in the Realm of Ghyran. [1i] Briarblight is a stronghold of the plague god but then under siege by the sylvaneth, there they were captured by the priest of Nurgle they pursued and were at his mercy until Velthur arrived. [1j]

Escaping they sought out Mortevals enemy (and former lover), the Weeping Widow, she informed them that Alarielle could cure Esselt's soul but it would cost her her life. Talorcan refuses to accept this and decides to seek out Nagash for a cure, seeking the realmgate to Shyish at Gravereach. [1k] The fugitives arrive in the Marrowfields and fight their way through ghouls to Wolfsend, the castle of the vampire Countess Thana de Barbetier, aided by one of her knights, Sir Duclaine. [1l]

Although the countess desired their conversation to ease her boredom, she soon discovers the reason for their journey, doubting that Nagash will aid them, she decides to take Talorcan for herself. The pair manage to overcome and stake her. [1m] With Esselt now near death, they discover that Velthur has found them again and when Esselt decides to submit to his judgement, Talorcan attacks the Stormcast who fights him off and kills Esselt.[1n]