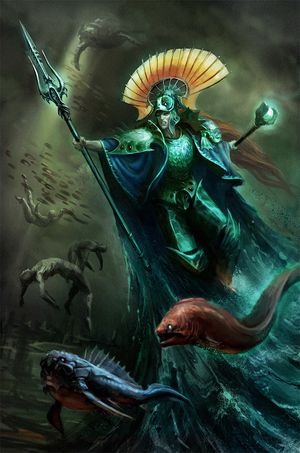 An Eidolon of Mathlann in its Aspect of the Sea form.

Eidolons of Mathlann are idolised echoes of a bygone era summoned to life in times of dire need. They are not the divine avatar of Mathlann, but rather a collective manifestation of the ancestral souls of the Idoneth Deepkin, wrapped in an image of their lost aelven god. There are two known forms that which the Eidolons take; that of a raging Storm, and that of the Sea.[1a][2a][2b][3][4]

Alongside them fight swarms of ethereal Stormshoals.[2a][2b][3][4]

The predecessors of the Idoneth worshipped Mathlann, yet it is no spark of the divine that creates the Eidolons, for their ancient Sea God is dead, slain by Slaanesh whilst trying to protect the souls that would one day be reformed into the Idoneth. The supernatural might of the Eidolons is not power drawn from a deity, but rather energies from the Idoneth's past; specifically from the chorrileums, living coral reefs where the Idoneth store the souls of their dead. In times of need, the enclave's leaders sanction the disturbance of the dead, summoning an Eidolon.[1a]

Bound together by need, the spirits form a gestalt of consciousness. This is instinctive to them, as they strike out against the foes of the Idoneth. Should an Eidolon's power fail, or should it be felled in combat, then the souls lent to form it will be lost forever.[1a]

Aspect of the Storm

When an Eidolon of Mathlann is summoned in the aspect of the storm, it appears swelling like a tidal wave before crashing into the foe; it is the power of the sea as a destroyer, a manifestation of anger that has been pent up so long that its release is as unstoppable as the tides themselves.[1a][2b][4]

In this warrior aspect form, the Eidolon's mere presence is enough to drench nearby Idoneth with a fierce fury and bitter hate, and an urge to lay low their enemies. It wields a long barbed spear – known as a mighty Fuathtar – crackles with power, for like its user it is composed wholly of epherma, its a blade honed by thousands of years of repressed fury and crackling with energy. In its other hand, the Eidolon wields a barbed Crulhook, a set of serrated blades attached to his arm by a strong chain which it uses to snare foes before dragging them into the deeps. Up rises the living tempest, before swooping down, crashing and reforming to dive once more.[1a][2b][4]

The armor of the Eidolons resemble a set of scale, paired with a closed-face helm and an enormous crest that resembles a spiked net. Their cloaks represent the unimaginable power of the seas and is styled as a cascading torrent of ocean water.[4]

Aspect of the Sea

In the aspect of the sea, an Eidolon of Mathlann is more controlled than the rage-blinded aspect of the storm, more Isharann than Akhelian. Yet, this becalmed demeanour in no way suggests it possesses a lesser degree of power; indeed, it is more like a placid ocean surface - it seems calm and placid, but belies dormant energies that lie beneath. Gazing upon this aspect of the Eidolon evokes a feeling akin to standing upon the edge of the abyss itself. Their very presence radiates an aura of unnatural tranquility that calms the fears of the Idoneth. [1a][2a][3]

An Eidolon in this Isharann aspect is a caster able to tap into the suppressed and dormant energies of the sea they can drawn when they need. They can cast the spell Cloying Sea Mists, a spell that releases golden energies into the currents of the Ethersea, which rejuvenates and heals wounded Idoneth and calls keening notes that lull even the most bloodthirsty warriors into a mystic slumber from which they never wake. Another spell they know is Tsunami of Terror which calls invisible waves of despair leave the weak-willed helpless and fill the brave with paralysing doubt, while sudden whirls of terror amid the ethereal surf that will send mighty warriors fleeing for their lives.[1a][2a][3]

It wields a massive Psi-trident which he can use to summon blasts of abyssal energy or stab their foes and a Deep-sea Scepter, wrought with jewels that can be used to club its foes that get too close. The armor of the Eidolons resemble a set of scale, paired with a open-face helm and an enormous crest that resembles a fan. Their cloaks represent the unimaginable power of the seas and is styled as a cascading torrent of ocean water.[2a][3]