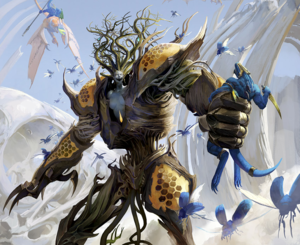 Drycha Hamadreth is the regent of the Outcasts, a dark Sylvaneth spirit who has her origins in the World-that-Was.

Alarielle herself was at first reluctant to plant her barbed soul pod, only doing so during the darkest days of the Age of Chaos and then in the hateful chasm of Hamadrithil. The Goddess hoped that malicious sentience that dwelt in that dark place would give Drycha the strength she needed to fight the invaders of the realm and in this she was correct for Drycha is now the embodiment of Hamadrithil's malice given form.[1a]

She moves across the Mortal Realms on a apparently random crusade against any that will face her, however some in the Royal Moot believe there is a hidden plan to her rampages but Alarielle remains silent on the matter.[1a]

Drycha Hamadreth has named herself Regent of the Outcasts and even went so far as to claim that Alarielle was dead and gone. Any alliances with non-sylvaneth are tenuous at best as she draws little or no distinction between orruks, gors, Stormcast or followers of Chaos.[1a]

Since she was planted in the Age of Chaos she has appeared on a number of occasions, emerging from the caves at the foot of Widowbite Crag to fall upon the Skaven assaulting the root clans of the Winterleaf Glade. She gathered a massive wargrove from various clans of the Deadwood Glade and slaughtered millions.[1a] Ancient Lharenthol of Clan Tethil cautiously allied with her to take back the Vastclaw Valley from the Ironjawz of Megaboss Grolnok Gitstompa.[1b]

She slew Duke Goral of Festerfane when he sought to destroy the Writhing Weald and entombed his body and his Axe Lifebiter at its heart, leaving her followers to guard it.[3]

Drycha is constantly torn between depression and rage and only reluctantly recognises her mother's authority, Alarielle having named her an Outcast due to her frequent assaults on allies as much as enemies. In truth she sees no difference between the warriors of Chaos and humans, Orruks or Stormcast Eternals - as to her all are invaders and enemies.[1a]

As a sylvaneth wizard, Drycha is able to use magic from the Deepwood Spell Lore as well as more traditional spells such as Arcane Bolt, Mystic Shield and her own Primal Terror.[1a]

Her material form is host to Spites - usually a colony of Flitterfuries that grow with her rage or a swarm of Squirmlings who suckle at her sorrow.[1a][2a]