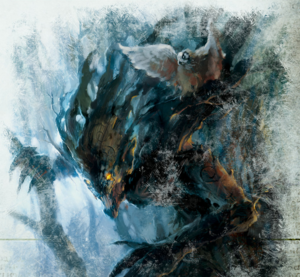 Dryads are Sylvaneth and impulsive creatures of nature, howling manifestations of forest's wrath, with rapidly changing emotions and thoughts. Some among the Noble Spirits do look down on them for their lack of focus and apparent disinterest in larger matters as opposed to more "petty" concerns.[1a][2]

Dryads were among the first Sylvaneth created when Alarielle first planted her children in the Age of Myth. They were scattered across the entirety of the Mortal Realms, especially in those lands of Ghyran beloved by the Everqueen. They came to be known by many names by the primordial tribes of men such as the woods-that-walk, forest daemons, and treefolk.[4b]

Until the Age of Chaos dawned, dryads seldom had to fight and then only against natural hazards but when Chaos swept into the Mortal Realms many of them were forced to fight or die. [1a][2]

Those who survived this brutal dark age were forced to change, and where they were once full of laughter and joy, many became dark and hate filled. They seek vengeance on the despoilers of their world and became adept warriors in their own right with long gentle hands transformed into powerful talons. They do not fight in serried ranks but rather excel in ambushing their foes or in large numbers forming a fast moving thicket of brutal talons under the direction of a branch nymph. They can appear or vanish quickly using the spirit paths, making them a highly effective guerrilla force.[1a] They defend their glades with a malign violence that almost resembles glee.[2]

Their mercurial, impulsive, and ever-shifting nature can make it difficult for humans to understand them, with their moods and personalities seemingly changing in an instant. To the Dryads there are no innocents when it comes to those who enter areas they consider sacrosanct, only trespassers that need to be culled.[4a]

Many Dryads have tiny Spites that nestle in their foliage or boughs, and the appearance of individual branchcrests and the colour of their barkflesh can vary considerably between dryads.[1c] Some, like those of Clan Talth'aan of the Harvestboon Glade vary their appearance and colours from season to season[1d] whereas others such as the dryads of the Winterleaf Glade express their bitterness and hatred in their colours.[1e]

Dryads and other Forest Folk serve as the fighting hearts of the Sylvaneth Wargroves, with most wargroves having at least three battalions of Dryads, each led by a Branchwraith to form the core of their armies. But larger groves, such as the Oakenbrow, will field more.[4a]

Branch Nymphs are the champions and greatest warriors among the Dryads.[3][4b]

If they are close enough to Wyldwoods they will receive blessings from the forest. Their songs enrapture their enemies. When many dryads gather their limbs and branches form an interlocking shield of thorns.[3]