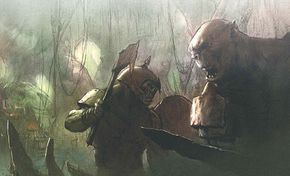 Kruleboyz within the Drowned Lands.

The Drowned Lands refers to a region of southern Thondia whose lands were poisoned by Kruleboyz under the leadership of Gazog. These orruks descending from the Morruk Hills ultimately sought and failed in the attempt to poison the leylines beneath Excelsis and drown the city in a mire.[1a][2b]

Krorach Creek was the first town to fall to the Kruleboyz under Gazog's grander plan to poison the leylines beneath Excelsis. Having collected the necessary ingredients beforehand, Wozgag - Gazog's chief shaman, advised testing his elixir's abilities. For this reason, Krorhoch Creek served as a testing ground. In the dead of night, the greenskins breached the township's boundaries and used the foul potion to infect the town's dammed river until in thrashed and writhed in torment. Inevitably, it burst its banks, flooding the town with congealing hunk. After that, it was a simple matter for the Swampcalla Shamans to transform the tainted earth into a true marsh to serve as prime hunting ground for their and their spiteful mates.[2a]

Salzagor's Hope was the next target in Wozgag's experiment. It is larger than Krorhoch Creek and ringed by Sigmarite statues capable of nullifying any magical assault from beyond its border - including, much to the Kruleboyz' frustration, the madness-mist given off by their potion. Instead, the Killaboss devised a plan by which his semi-aquatic boyz would slink their way into the river and hijack a trading fleet entering the town through the river. Once the greenskins snuck through the mystical barrier of the guardian idols, the mist potion jars were broken and the town was smothered in a cloud of choking, dread-inducing fog. The orruks slipped through the murk like mist-djinn and made sport of the panic-crazed citizens.[2a]

Amberstone Watch was a Sigmarite Strongpoint built atop a confluence of leylines. Though it was no meager target, it was close enough to the Morruk Hills that the Weeping Fangz could muster the strength of their allies. Though the defenders fought valiantly, the majority had been shorn of sleep for several nights by horrifying howls echoing from the Morruk Hills - a ploy to exhaust the defenders. No sooner had they conquered the settlement than the Swampcalla Shamans set about turning it into a more suitable lair, summoning clouds of shrouding bog-mist further laced with the mind-melting, acidic fumes of the shamans' mystical potion, and turning the town into a swamp. The Kruleboyz dubbed their new stronghold 'the Dripping Rock', where the setup about the process of poisoning the leylines and force all of Thondia to wither.[2a]

Formation of the Drowned Lands

The Stormcast Eternals of the Auric Lions chamber, reinforced by Yndrasta, would eventually drive off the greenskins and end their plot to bring down Excelsis during the War at Amberstone Watch.[3a] Regardless, the Kruleboy Killaboss Gazog had already pumped enough mire-fith into the arcane pathways that the land could not help but rebel. Around the geomantic lines the land began to spongify, swathes of earth softening as brackish waters bubbled to the surface. With horrific speed, mangroves and bogs began to form across southern Thondia as the land itself was sickened. Thus were the Drowned Lands born as a new horrific battleground in the war for Ghur.[1a]

No true civilisation can last within the Drowned Lands. The bones of the earth are blackened with muck, and with each week the swamps creep further into the heartlands. Several nascent settlements have been swallowed up by these grasping bogs, the fate of their inhabitants left unconsidered. Both Kruleboyz orruks and grots have been drawn to these lands in abundance, for the boggy environment suits them well. So too have the Contagiums of Nurgle's Rotbringers, wo see the lands as a fine incubator for newly concocted diseases. Armies of Sigmarites and their allies launch daring raids into the swamps, for they remain rich in realmstone deposits and trasures long-buried now drifted to the surface. However to retrieve such prizes, one must survive giant anthropods, flesh-eating plants and slimy monstrosities that haunt the mires.[1a]

Meanwhile, the necropolis of Xharohz still stands amidst the swamps. Its Bonereaper garrison is a sub-legion of the Ivory Host under the command of Liege-Kavalos Yhul-Nabal, who bitterly rues the seething environs they now find themselves in. Regardless, their mission has not changed - and the bones of the swamp-dwelling greenskins or tribesmen will serve as well as any.[1a]