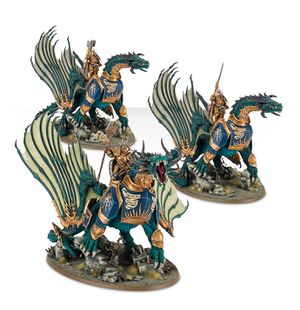 Drakesworn Templars are knights of the celestial Stormhosts who ride to battle upon the backs of Stardrakes. They are counted as some of the greatest champions of Order and even other Stormcast hold them in awe. A singular Drakesworn Templar and their Stardrake companion can devastate the flank of an enemy army and when an Extremis Chambers's Drakesworn Templars ride into battler together, they can level fortresses and turn the tides of entire battles.[1a][3b]

Becoming a Drakesworn Templar is no easy feat and many who attempt the Trials of Starwalking fail, or else bond with Dracoths and become Dracothian Guards. Those who do succeed find a solargem, the soul of a Stardrake trapped in the lower realms. By returning a solargem to Azyr, the Stormcast ensures the Stardrake can be reincarnated. Only the purest champions of Order can find a solargem, as they are protected by enchantments. Once the solargem is recovered, the Stormcast and Stardrake become bonded, a relationship that echoes the one formed by Sigmar and Dracothion in the Age of Myth.[3b]

The Chamber Command of an Extremis Chamber is comprised of three Drakesworn Templars led by a Lord-Celestant.[3a]

When not engaged in war, Templar and Stardrake spend their time maintaining their Stormhost's Drakesworm Temple, the facility where an Extremis Chamber trains and worships.[3a]

The Stardrakes upon which the Drakesworn Templars ride are no less champions of Order than their riders. When engaged in war they can rend their foes with their Great Claws, summon starfire from the heavens, slam their thunderous tails into foes, and create lightning-charged clouds with their roars.[1a]

These champions of Azyr have a wide array of storm-wrought weaponry they take into their battles against the enemies of Order. These include Tempest Axes, Arc Hammers, Skybolt Bows, and Stormlances.[1a][2a]