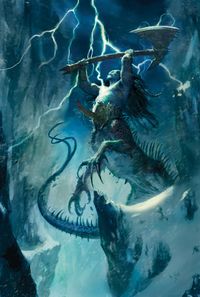 The Dragon Ogor Shaggoths are ancient leaders of the Thunderscorn, each a hulking and mighty titan of war capable of crushing a fortified building under their bulk. Because of this they are used as virtually unstoppable, living wrecking balls by the forces of Chaos. They are few in number.[2][3]

These Dragon Ogors are the lords of the highest mountain peaks. They only come down from their mountaintops when covered by the wildest storms to release the anarchic fury of the primordial storm.[1a][1b]

Shaggoths are towering mountains of muscle and rage that look like a hugely muscled man with the lower body and tail of a dragon. They can also attack their enemies by skewering them with their taloned forelimbs and swiping at them with their sweeping tail.[2]

Dragon Ogors are casters able to cast Arcane Bolt, Mystic Shield and Summon Lightning spells. This last spell can be used to empower and heal their fellow Thunderscron. Allied wizards near these unit can also Summon Lighting.[1a][1b]

In combat they wield Leviathan or Storm-wrought Axes, so massive that even an entire regiment of humans would struggle to lift them. They use them to hack through entire armies until the enemy feels that he has to retreat, from fear or loss of fighters.[1a][1b][2]

In ancient times, before even the dawn of man, these monsters bartered with the Chaos Gods, who granted them immortality.[2]