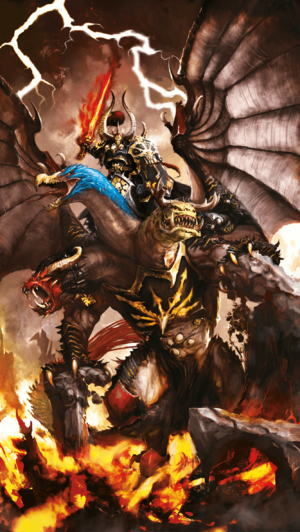 Archaon atop his mighty steed, Dorghar

The Steed of the Apocalypse, Dorghar is Archaon the Everchosen's personal daemonic mount and one of the six Treasures of Chaos.[2a]

The mighty steed is the fourth treasure claimed by Archaon. To obtain it, he had to venture into the Realm of Chaos itself. Upon reaching the menagerie of the daemon lord Agrammon, he used the Eye of Sheerian to locate Dorghar's cage and leapt upon his back. After a mighty contest of will and personality. he broke the steed and claimed Agrammon's most prized possession as his own, offering him bloody revenge on his jailers.[2a]

The all gods of Chaos, save Slaanesh, sent some of their mightiest Greater Daemons to test Archaon's skill during his endless conquest through the Realm of Chaos.[1a] Dorghar and Archaon defeated these mighty scions and Dorghar consumed their essense, transforming into an even more powerfull three headed winged monstrosity. Through his transformation, any that Dorghar consume never truly die. Their souls now trapped inside the fell steed. Because of this, Stormcast dread him as their souls can not return to Azyr. Mighty heroes such as Thostos Bladestorm, Lord-Celestant of the Celestial Vindicators are bound within his stomach.[2a]

A scaley, twin-tailed beast, Dorghar stands taller than a Bloodthirster of Khorne and his wingspan is enormous. He bears three heads, each representing one of the chaos gods that sent their daemons.

The Khorne head is shaped like a vicious hound. The avian head of a Tzeentch Lord of Change represents the fickle god of magic and deceit. A fetid horned head represents Nurgle.[2b]

Dark scales cover most of the steeds arms, legs and wings and on his back he carries a saddle for the Grand Marshal of the Apocalypse.[2b]

As Dorghar consumes the souls of his victims, he grows in power. His Nurglesque head spews bile at his enemies. When the Khornate head eats, it invigorates both mount and master. The Tzeentchian head is capable of consuming endless spells.[2c]

The other six Treasures of Chaos.[2a]