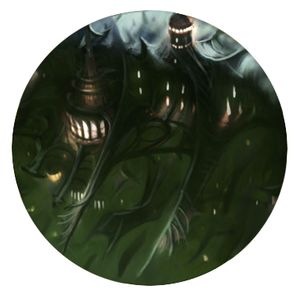 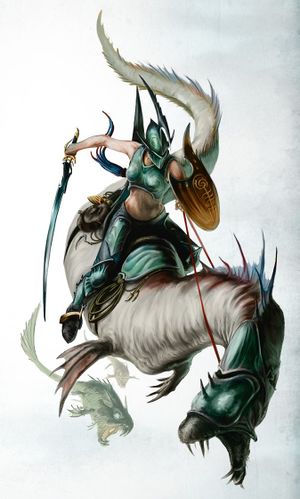 The Dhom-hain Enclave is one of the greater enclaves of the Idoneth Deepkin. Its name means Deep Questors. [1d]

Other Enclaves consider the Dhom-hain as barbaric or savage and note that they, fierce and proud no longer attend the assembrals that tentatively link the deepkin. Some claim that they have regressed to a more primitive state in order to survive and note that their armies are built around the bond-beasts.[1d] Only the Fuethán seem to at least grudgingly respect the ferocity and skill of the Dhom-Hain warriors. [2a] In turn the people of Dhom-hain consider the others to be misguided and arrogant, prone to meddle in the business of others.[1f]

Fleeing from the light of reason of their creator god, Teclis, the Cythai splintered into six factions and sought the deep places of the Mortal Realms.[1d] The ancestors of the Dhom-Hain, were quite unlike the other Cythai, filled with a reckless spirit, instead of the cold demeanor of the rest of their kin.[2a] Being among the first to plunge into the newly discovered Whirlways, the Dhom-hain found their way to the Black Trough deep down in the Ominod Sea in the Realm of Ghur. They found the deep seas full of deadly monsters and dangerous creatures and nearly half of those who made the journey are killed in battle and devoured. Slowly their Isharann learn to shape the living coral of the depths and they build Rúndhar, a Secret City with elegant towers and citadels inside the honeycombed chambers inside the walls of the Black Trough trench.[2a]

The first queen of the enclave, Gwyth Banrionic leads a large raid on the coast of the Tendril Sea attacking the Sylvaneth inhabitants but she is slain by an angry Alarielle who arrives to aid her people. [1b]

Territorial disputes between Dhom-hain colonies and those of the Ionrach enclave flare into war with battles fought in the realms of Ghur, Ghyran and Hysh. The fighting culminates in the infamous Battle of Tears and the Ambush at Glyngulch, resulting in the death of thousands of Idoneth.[2b] Following the war, the Dhom-hain no longer attend the assembrals. [1b]

The enclave finds that other aelf souls are far superior to most other races and seek them out wherever they can, in the process attacking a number of war covens of the Daughters of Khaine who swear vengeance on all deepkin. [1b]

A huge Bonesplitter fleet is destroyed by the combined forces of the Dhom-hain and Nautilar Enclaves, killing tens of thousands of greenskins. [1b]

The enclave is the first to encounter Stormcast Eternals during a battle on the Coast of Horns, they form a temporary alliance – partly due to the inability of the deepkin to take their souls. [1b]

The Necroquake in the Time of Tribulations results in massive assaults on all the deepkin across the realms. [1b]

In response to an attack of the Kraith sect on a one of their raiding force, killing or sacrificing hundreds of Namarti and Akhelians, the Dhom-Hain launch a reprisal attack on the Khainites.[2b]

With the theft of the Ocarian Lantern by Morathi and the existance of all of Idoneth at stakes, the Dhom-Hain break their isolation, joining an assembral for the first time in ages.[2b]

Willful and fierce, the independent minded Dhom-Hain rely on their own skill and cunning to survive in a hostile environment.[2a]

Unlike the other enclaves of the Idoneth, the Dhom-Hain are divided into seven great clans. Each takes their names after one of the great and ferocious beasts of the ghurish seas. The different clans practicse their own violent traditions, some file their theth into sharp fangs, while others intake the toxic excretaions of the Spined Tuskarrs.[2a]

Dhom-Hain soul raids often prey on the various Orruk or other greenskin tribes of the ghurish coastlands. While dull and lacking in quality, the abundance of these souls makes up for this in the eyes of the Dhom-Hain. Over multiple applications, the fury and savagery of the greenskins seems to have in parts filtered through to the enclaves Namarti caste. Many of them now seem to revel in the fighting and violence of battle, which only adds to the reputation the Dhom-Hain have among the other enclaves.[2a]

Warriors of the enclave are often clad in green armour with dark clothing.[1f]

For the armies of the Dhom-Hain, it is common for an Akhelian King to be surrounded in battle by a bodyguard of Ishlaen Guard entirely made up of junior members of their dynasty.

The Lasroch Host: a phalanx entirely made up of Akhelian Guards and many unusal ghurish beasts they captured. [1c][2c]

They have control over a number of Whirlways that enable them to move and communicate across the Realms.