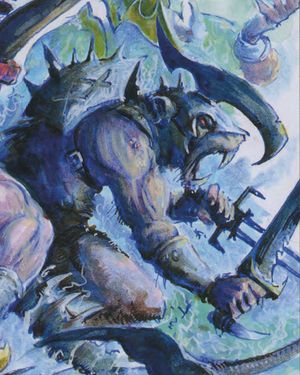 Deathrunners are cunning murderers of the Eshin clans, usually dispatched to the battlefield on an assassination mission. These Skaven use alchemy, shadow magic and poisoned blades to dispatch their foes, usually by plunging their blades on the back of their marked targets.[1a]

They are usually followed by an illusory twin and is near impossibly to tell which is real and which is fake, until one is slain or the real Deathrunner attacks their foes.[1a]

A Deathrunner is armed with a Stab-slicer dagger in one hand and a Bloodblade in another. They can also hurl razor-sharp Warpstars at their foes.[1a]

They have Shadowsmoke Bombs that they can use to release a cloud of alchemical fumes that mask his position, protecting him from missile fire.[1a]