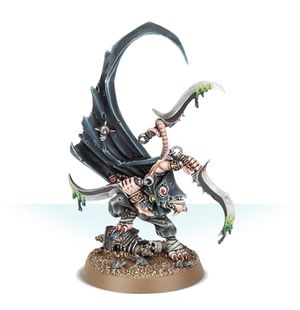 A miniature of a Deathmaster.

The Deathmasters are elite agents and most deadly killers of the Clans Eshin and the represents the left claw of the true masters of Eshin Clans who rarely come out of the Realm of Shadow. Such is their skill it appears almost supernatural and each one is a specialist in arson, sabotage, assassination and misdirection. They are also given almost complete autonomy by their clans in choosing the methods for completing their clandestine missions.[1][3]

Deathmasters are surrounded by rumours such as being able to slither through cracks wider as a hair, having poisonous shadows and being able to communicate with one another through telepathy. Regardless of the these claims their mastery of the arts of swift and stealthy murder are remarkable with them being able to leap many times their own height, run along vertical surfaces, duck and weave with such speed its impossible for even the most skilled warriors to land a hit on them. These Skaven can also detect and identify venoms by smell, catch hurtling projectiles, and are also deadly in unarmed combat.[1]

They are masters of murder and sabotage, often hiding themselves in the regiments of Skaven before striking at their intended foes.[2a][3]

Deathmasters use a bewildering array of blades, throwing weapons, poisons, explosives and more esoteric tools. They are most commonly armed with Eshin Throwing Stars which are hurled at foes in rapid volleys. In melee they use either Weeping Blades or Fighting Claws.[1][2a]