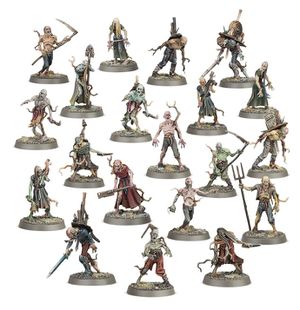 A horde of 20 Deadwalker Zombie miniatures.

Deadwalker Zombies are the humanoid corpses of the recently dead, given animus by Necromancy. Rotting flesh clings to their bones, giving off a charnel stink whilst decaying vocal cords retain the ability to moan wordlessly. [3a]

Since the eruption of the Necroquake, migrations of these unliving shamblers have become a threat so common that the denizens of the realms have had to adapt. Bogs, fens and plague pits are all spots from which a Deadwalker march can begin, and many free cities have instituted volunteer bands known as 'pyre-gangs' whose duty is to track and immolate the epidemics before they can spread. [1c] [3a]

They are slow and clumsy by themselves - being almost mindless - but their masters make sure to drive them into battle in large hordes. Even the most noble of Vampire Lords will send waves of these creatures in order to exhaust their armies, battering them against walls, fortresses, and barrages of arrows. They attack with single-minded tirelessness, biting and tearing their victims and ignoring all but the most grievous wounds. Those they slay - even the most noble of heroes - are liable to joining their horde, rising as Zombies themselves.[1b][1c][2][3a]

These hordes are often supported by Death Standard Bearers and Noise Makers, and the nearby presence of a Corpse Carts provides them with extra vigour.[1a][1b]

Draped in tattered clothing, some manage to maintain slack grips on crude improvised weapons, although many are content to tear at the living with filth-encrusted nails and teeth. [1c][3a]