From Age of Sigmar - Lexicanum
(Redirected from Dark Elves)
Jump to: navigation, search 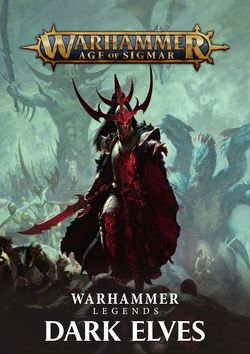 The Cover for the Dark Elves Legends Compendium

Dark Elves are an army originally from the Warhammer: Fantasy Battles that was broken down into many factions for the Grand Alliance of Order when it transitioned into Warhammer: Age of Sigmar. The army would later be re-released with Warhammer Legends, with warscrolls for every Citadel miniature Games Workshop has released.

From the chill land of Naggaroth, the black-hearted Dark Elf legions pour forth. For thousands of years, the Dark Elves have plundered the riches of the world, using the blood and treasure of distant lands to fuel their wars. From his iron throne, the Witch King musters his armies to assail civilisation. Corsairs descend on trading ports leaving only death in their wake, Sorceresses conjure the darkest magics to consume their foe, and crazed devotees of the Bloody-handed God slaughter their way across entire kingdoms. The craven may cower behind their walls, but nowhere is safe when the Dark Elves march to war.

In the Mortal Realms their units exist in the following factions: 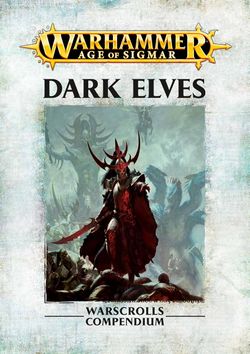 Embittered and cruel, the aelf Exiles roam the Mortal Realms bringing death to every foe they meet. These swift and vicious warriors are ostensibly allies of Sigmar. In truth, they serve only the shadowy Malerion, and themselves. Emerging from the darkened places of the realms, the Exile warbands engage in lightning raids that leave ravaged corpses piled high in their wake. Then they vanish as quickly as they came, like smoke melting away on the breeze.