From Age of Sigmar - Lexicanum
(Redirected from Daemonette of Slaanesh)
Jump to: navigation, search

Daemonettes, know by other names like Bringers of Joyous Degradation and Maidens of Excess are the lesser and most numerous of the daemonic servants of the Chaos God Slaanesh. They are the embodiments of the dark and twisted emotions of mortals and, as such, are attracted to sources of anguish, while taking delight in creating disasters, rejoicing in the carnage that comes from it.[1a]

They are created from echoes of mortal desire and shaped by Slaanesh to fulfil his need for constant conquest.[1a]

These daemons are considered, at the same time, both beautiful and revolting, with glamours that show them as perfect when in truth they are repulsive and terrifying. They contain an androgynous charm, with slender, clean-limbed bodies, lithe legs and pale, smooth skin. Only when a Daemonette is poised to strike do they unveil how grotesque and disfigured their bodies are, revealing barbed claws and cruel talons.[1a][2a]

They have gaudy tattoos made out of whorls of pigment on their bodies which, when they surge across the battlefield form dizzying fractals of colour and shape.[2a]

They are sadistic, their twisted minds mainly fixated on inflicting physical, mental and spiritual pain, trying their best to be as inventive as possible. This is specially prevalent in battle, finding secret ecstasy in the raw waves of emotions released from their enemies, smiling even in the most gruesome conflicts as they dance from foe to foe as their claws slice through flesh and armour. In battle they are vicious in the extreme, while playing gleefully with their prey. They enjoy showing the dismembered their own severed limbs, use their speed to inflict dozens of cosmetic wounds or trace blasphemous words on their targets' bodies. But above all, they never miss an opportunity to inflict a final agony on the dying, twisting the claws in their fatal wounds so as to cause the maximum amount of pain. The more a Daemonette draws out these horrific acts, the more it eagerly drinks in the raw torment and despair that fills the air.[1a]

Daemonettes see each other act of disfigurement and degradation with shrill keening excitement, at the same time outwardly impressed with their kindred's work as they are secretly trying to out-perform each other in acts of grisly extravagance. This is a constant competition with each other to see who can inflict the most pain on the enemies of Slaanesh.[1a][2a]

Like their creator they need to feel emotions at their most extreme, sometimes becoming incapacitated from joy are feeling a simple sensation, while at others they are almost vampiric need to devour the essence of tortured souls.[1a] 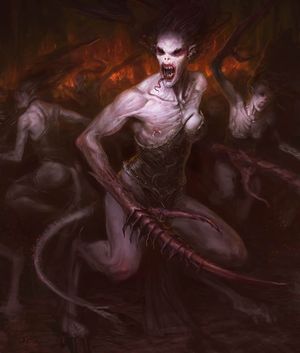 A throng of Daemonettes

When in the Dark Prince's domain they gather into crowds, lounging on silken cushions as they play with the flesh of their latest mortal toy. Its a common hobby among these daemons to pry the secrets, those most lurid and perverse, from the heart of mortals and divulge them to rise into esteem of their fellows and master. Those secrets extracted from the lips of their dying enemies are even considered a form of currency in the Circles of Slaanesh.[1a]

Should these creature grow to hate something, usually those well-organised societies, disciplined armies that kill without passion or joy or conclaves of the chaste and phlegmatic and others that Slaanesh finds most distasteful, it becomes an all-consuming and infectious feeling. Their numbers becomes filled with jealous ire and bitter, uniting thousands of Daemonettes with the same evil intent. Should these daemons filled with incandescent outrage reach mortal lands they will form armies to tear down anything they find repugnant, unsubtle or crude, replacing the work of mortals with artistic vistas of destruction. Above all Daemonettes will do anything to destroy the Realm of Hysh, for they have a special hatred for this realm where intellectualism and enlightenment are abundant.[1a]

They possess an astounding speed and impossible grace that allows them to quickly dance from foe to foe, using their lithe legs to surge across the battlefield at serpent-like speed.[1a][2a][3]

These daemons have an androgynous charm that is augmented by a permeating aura of beguilement and a strange musk that hangs around them like a heady, intoxicating, cloying perfume or aroma. Those who fight them in battle, become filled with unnatural emotions, as their martial instincts get overpowered by feelings of lust and adoration. Those that become inflicted with these emotions grow a sense of self-loathing, becoming jealous and disgusted by the perfection of their foes which is impossible for them to attain.[1a]

These daemons are also covered in an aura that disguises their true form, repulsive and terrifying, showing them instead as alluring visions of perfection and the ultimate object of desire in the eyes of mortal, regardless of race, gender or morality. None that gaze upon their graceful forms forget the tide of sensuality and the strange feeling of repugnance and perverse longing that forever gnaws at their minds. They only reveal their true grotesque forms when they are about to strike, so those few that survive their attacks are left devastated in mind and soul, haunted forever by their monstrous beauty.[1a]

In the Palace of Pleasure they work as courtiers and torturers.[1a]

In the Mortal Realms and the rest of Slaanesh's Domain they work as soldiers, warriors, enslavers and messengers. The packs they form are often the core of the Dark Prince's armies. Those that bring the secrets of their dying enemies, a valuable form of currency amongst those of the Circles of Slaanesh, are those considered most valuable by the Keepers of Secrets.[1a] 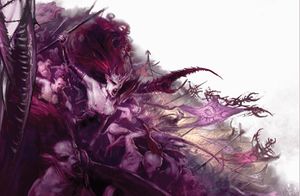 An army of Daemonettes charging to battle.

Individually they are lithe and dexterous killers, gifting their victims with combinations of excruciatingly painful caresses and the most delicate and tender of killing strokes deliver through their piercing claws. Daemonettes often attack in swift and surging masses, dancing across blood-soaked grounds as dead bodies form into a carpet for their feet. While fighting their honeyed voices sing joyous trilling songs that praise Slaanesh as they maim and slay in the name of both agony and pleasure.[1a][2a]

These packs of Daemonettes are usually lead by an Alluress which is the strongest of the pack. They are often accompanied by Daemonettes equipped with special objects that grant many benefits to the whole unit. Standard Bearers, making their attacks more likely to hit. Icon Bearers, can summon more Daemonettes and stops them from retreating. Hornblower which make enemies more susceptible to the horrors of war. When near Daemonic heroes of the same patron, who shimmer with raw power known as Locus of Excruciation, they are strengthened, making them more likely to resist damage.[2a]

Daemonettes can also be found in other types of unit of the armies of Slaanesh, like: