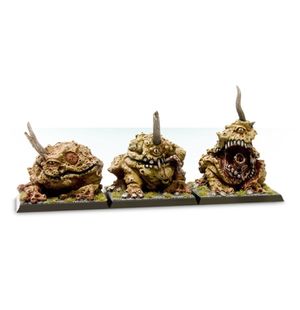 Daemon Plague Toads of Nurgle, also known by other names like Rot-Eaters and Sewer-Kin, are ravenous Daemon vermin or lesser beasts that can be found fighting in Tamurkhan's Horde.[2][1b]

They are mutated, pseudo-amphibian sacs of brackish filth and pus. Their bloated flesh is riddled with abscess, so much that weapons often slide harmlessly through them or even end up being swallowed by the foul bulk. Their tongues can grasp their foes and their yawning, jag-toothed maws are wide enough to swallow a man whole.[2][1a]

These creatures are drawn to places of disease and decay and in those places, those who can tap into the magic of Nurgle, can easily summon and bind them to their will.[2]

These lesser daemonic beasts are often corralled and herded into battle to be used as mounts by Plaguebearer. These are called Daemon Pox Riders of Nurgle and they are the vanguard of the armies of Nurgle. They lollop into battle atop these beasts and crash into their foe's ranks like bloated cannonballs.[3][1b]