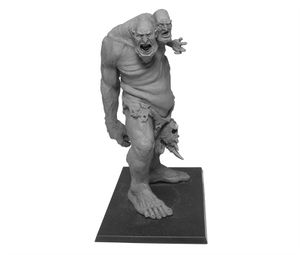 A miniature of a Curs'd Ettin.

Curs'd Ettin are hideous two-headed mutants that are part of the Slaves to Darkness and Monsters of Chaos armies. These mutated siblings are constantly bickering and gibbering with each other, but because of the power of Chaos these arguments drive those who hear them insane. The only thing they agree on is the need for fresh meat, such that they are often lured into battle with promises of meat and death. It helps that their strange physiology allows them to grow stronger and heal themselves every time they feast on their foes. They crush their foes by swinging their single club-like arm or by stomping on them.[1]

They are composed of kinsmen fused together into one malformed body, the two souls forced to share the body.[1]