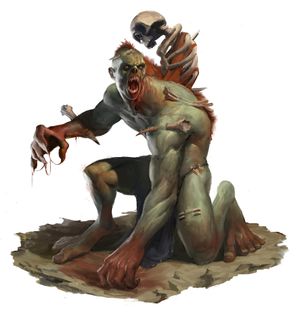 Crypt Ghast Courtiers are Mordants of the Flesh-Eater Courts that are more powerful and intelligent than their mordant brothers and sisters, having grown strong on their lieges vampire blood thus making them capable field commanders. They forever jockey for positions, trying to gain their King's attention. In their minds they are noble heroes clad in shining armour that proudly lead their soldiers into war. [1][2][3a][3b]

Most Crypt Ghast Courtiers were in fact great heroes, wizards and sages but have fallen into despair and cannibalism, corrupted by the madness of their king. They retain small traces of their old personality and it is this which often determines their role at court. Crypt Ghast Courtiers have titles such as Baron Gizzard who commands the Ghoul Patrol while Marquis Retchbile commands the King's Ghouls. [3a][3b]